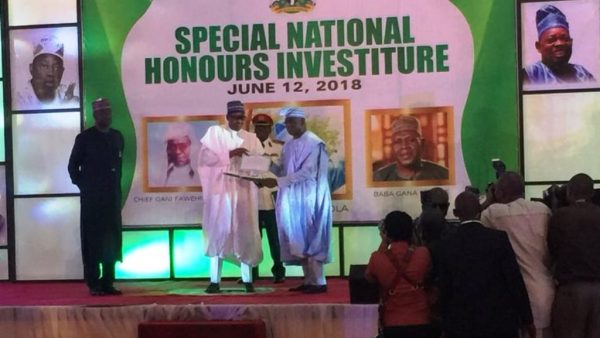 Kola Abiola has received the posthumous Grand Commander of the Order of the Federal Republic (GCFR) award bestowed on MKO Abiola by President Muhammadu Buhari.

#NaijaLiveTv reports the son of the acclaimed father of Nigeria democracy received the late Chief Abiola’s GCFR award on behalf of the entire family on Tuesday at an elaborate special national honours investiture event that held in the Aso Rock, Abuja.

#NaijaLiveTv reports guests, including those who played critical roles in the historic June 12, 1993 poll presumably won by the late business mogul assembled at the Aso Rock conference hall to witness the awarding of the June 12 champions.

President Buhari had on June 6 directed that from 2019, Nigeria’s Democracy Day, marked every May 29 for the past 18 years, would now be celebrated on June 12.

The President directed Malam Shehu Malami, the Attorney-General of the Federation and Minister of Justice, to take immediate steps to publish the Presidential Order in Federal Gazette as follows: “Chief MKO Abiola-Grand Commander of the Federal Republic (Posthumous).

The President said these should be done so that the June 12 award ceremony could go on as planned.