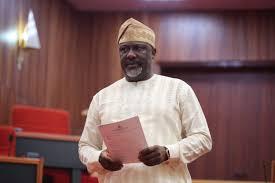 Mr Melaye has been bed-ridden since he landed in the hospital after a failed attempt to evade being taken to Kogi State by the Nigerian police.

Mr Melaye raising a point of order on Wednesday thanked his colleagues in the Senate, members of the House of Representatives, his constituents and the NIgerian populace for standing by him during his travails with the Senate. Mr Melaye also took his time to thank the leadership of the People’s Democratic Party (PDP) for their support.

Mr Melaye, who attended the chamber with a neck support, also asked the Senate President, Bukola Saraki, to mandate the sergeant-at-arms to create a seat for him at the opposition wing of the chamber.

Thereafter, he announced he would sit beside former Senate President, David Mark, pending the time a seat will be allocated to him. He was thereafter aided by some of his colleagues to his preffered seat.

He is, however, yet to formally join the PDP. To do so officially, Mr Melaye would have to write the Senate president of his decision to leave his party and join the opposition.

The letter would then be read during Senate plenary. More details later…