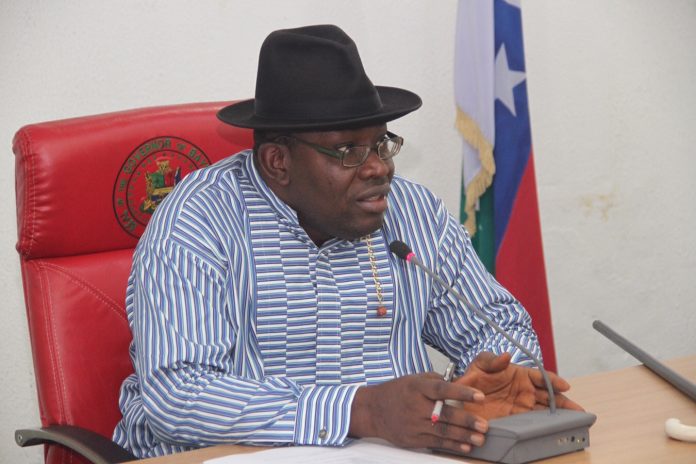 Youths in Bayelsa State have again commended Governor Henry Seriake Dickson for given them the opportunity to occupy key positions in his government.

Special Assitant to Gov. Dickson on Student Affairs, Comrade Atti Moses gave the commendation when he led other youths on a visit to the State Commissioner for Information and Orientation, Daniel Iworiso-Markson.

Comrade Moses who is also a member of the Nigerian Youth Parliament said Dickson has exposed them to governance by building their capacity and enhancing their potentials.

He thanked the governor for the gesture and assured him of their unwavering support for his administration, as he continues to give them a pride of place.

The youth leader also commended Iworiso-Markson for his strategic management of public information which has earned the state accolades and his support for the development of youths in Bayelsa State.

According to him, the mouthpiece of the government remains one of the leading lights in the state who many of them have come to see as a role model because of the sufficiency of his character.

Responding, the Information Commissioner thanked them for the visit and the kind words to the administration of Gov. Dickson, assuring them of better days ahead for youths in the state.

While advising them to take advantage of the opportunities the Restoration Government has provided to better their lives, Iworiso-Markson warned them against indulging in crime and criminality.

He also warned them against engaging in any form of violence during the forthcoming general elections, saying no ambition of a politician is worth their blood.

” Let me thank you first for this visit and express my enthusiasm in seeing youths like you being productively engaged. I want all of you to be the best that you can. Use your ideas and talents to rule your world.

“Let me remind you that as youths you represent the hope of Bayelsa. His Excellency the governor believes in youth so much and if you conduct yourself very well, the governor will recognize and do more for you.

“There is no short cut to success. Task yourselves and go for leadership training. The exposure you get will add up and build you to discharge your responsibility effectively” he concluded.

The highpoint of the visit was the presentation of The Bayelsa Youths Leadership Award for Excellence to the Commissioner, for his support to youths and achievements so far in office.

JUST IN: Heavy security as court set to deliver...