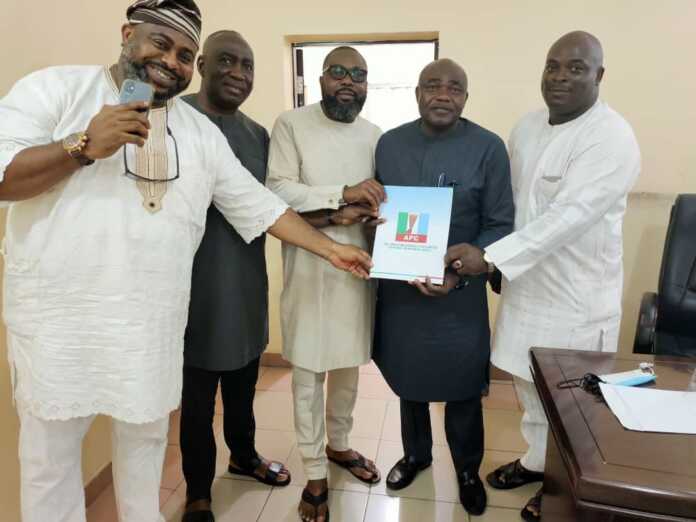 Chief Abel Ebifemowei, has obtained the senate expression of interest and nomination forms for the Bayelsa Central Senatorial District bye-Election, under the platform of All Progressives Congress, (APC).

The event was witnessed by members of his campaign team, stakeholders and party faithfuls.

Chief Abel while speaking with Tekenah shortly after picking the Party’s nomination form at the National Secretarit in Abuja on Thursday, said he is very confident of victory for himself, his constituents and the entire people of Bayelsa State.

He said: “I don’t dabble in things i don’t know. When i decide to do anything, i always aim for victory. I dont know others who have picked the nomination form but i know I’ll be victorious.”

Chief Abel, who hails from Southern Ijaw Local Government Area of Bayelsa state, says he is maternally from Kolokuma/Opokuma LGA and has lived in Yenagoa for many years. “I am very familiar with the issues my people face,” he said.

Chief Abel, popularly known as ‘king of the Youths’ is a nephew to late Chief DSP Alamieyeseigha, the first executive governor of Bayelsa state.

Recall that after the Swearing in of Senator Douye Diri and Lawrence Ewrudjakpo of the Peoples Democratic Party as Governor and Deputy of Bayelsa State on February 13, 2020, the Independent National Electoral Commission (INEC), had declared the two Senatorial seats vacant.

The Senatorial Bye-Election is scheduled to hold on October 31, 2020.