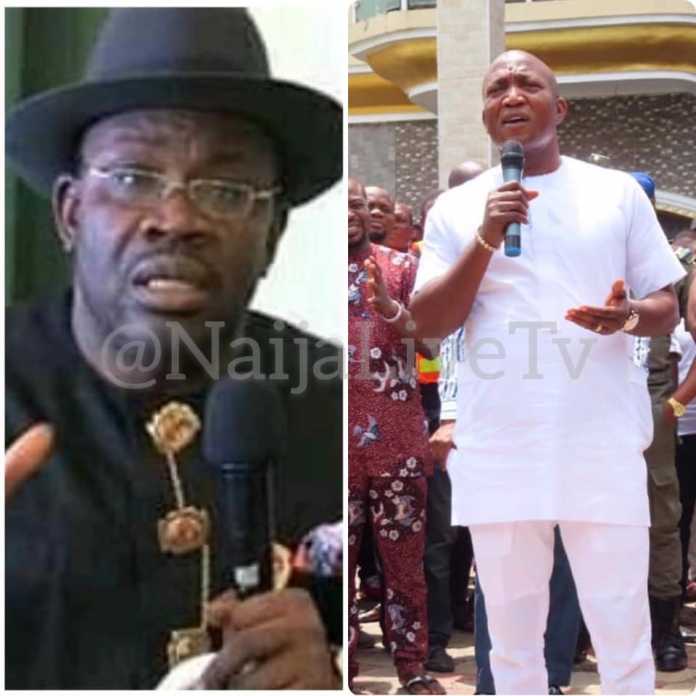 GOVERNOR Seriake Dickson of Bayelsa State  Yesterday mocked the opposition party in the state, the All Progressive Congress (APC) over the emergence of the flag bearer, Chief David Lyon, predicting that the November 16th election is between an expirienced candidate of the PDP and a rookie flag bearer of the Opposition party.

Dickson said the opposition All Progressive Congress (APC) in the state is not prepared for the November 16 governorship election and does not have what it takes to win any elections under a peaceful and democratic atmosphere in the state.

Governor Seriake Dickson, who made this known on Monday evening, during his monthly media chat at the Government House, also claimed that due to ongoing litigation against the emergence of Chief David Lyon as flag bearer of the APC, the party does not have a validly elected flag bearer for the November 16th election

Governor Seriake Dickson ,while mocking the APC said though the validity of the APC flag is still being contested, he is a rookie and a stooge to some persons who will rule Bayelsa through the back door.’

‘This election would be between an experienced PDP candidate and a rokkie that was reluctant to run but they forces him. The primaries they did in Bayelsa was a charade. It was a desecration of rule and regulation of the APC.’

He said though his comments about the APC primaries may be miscontrude to mean interference, ‘ am an interested bystander. PDP primaries threw up a genuine candidate but the APC denied the members of their party opportunity to vote. They simply cook up figures.’

‘As it stands today, APC does not have a validly elected flag bearer.I want everyone in the state to know that.The electoral act and the APC constitution is clear on that.You don’t become a candidate by being allocated figures in an hotel.’

On the preparations of the parties for the election, Dickson said  “This election is a very important election where you will either vote for stability or instability, security or insecurity, development or retrogression. But knowing the kind of people you are, I know the party you will cast your votes for.

“As usual, they are also preparing to write and announce fake results. But my party will be going out to all the nooks and crannies to talk to you the people.

“I urge you all to shun violence. Say no to those young men who are carrying arms and driving their fellow brothers and sisters from their communities because of partisan differences.

“Let me use this opportunity to again call on security agencies to be alive to their responsibilities. I also call on the leaders of these communities to rise to the occasion because communities are bigger than political parties.

“The historical, cultural and even the blood we share are more important than any partisan differences.”

According to the governor, his administration has raised the standard of governance for the people to make an informed choice that will sustain the prevailing peace, stability and development in the state.

He also dismissed the allegation of hobnobbing with the APC, stressing that as a politician of conviction, he would continue to play opposition politics for as long as possible.

“The media adviser to the APC Governorship Candidate in Bayelsa State Chief GIFT EBIKI has reacted to a statement credited to the Bayelsa State Governor Hon. Seriake Dickson saying that the APC doesn’t have a validly elected candidate for the November 16th Governorship election in Bayelsa State is the highest mischief and derigotary of a Seating Governor”

“Governor Dickson is not in a position to discuss APC matters, he should be concern himself with the Crisis redden his Party PDP.  it’s only INEC that can talk of parties candidates been Validly Nominated or not and indeed Chief David Lyon is the Candidate of the APC”

*BAYELSA GUBER: Defectors are doing so to protect their Surveillance contracts – Gov. Dickson*

David Lyon: The governor that never was