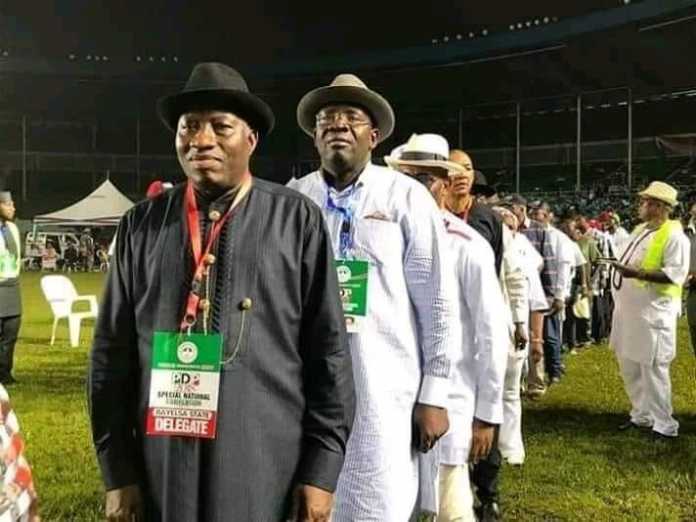 EBIOWEI LAWAL reports on the ongoing power struggle among the major actors in the ruling Peoples Democratic Party (PDP) in Bayelsa State over the ticket of the party for the forthcoming governorship poll in the state.

WITH the Independent National Electoral Commission (INEC) release of the guidelines for the November 16, 2019 governorship election in Bayelsa State, the attention of the citizens of the state has significantly moved from accessing the performance of the administration of Governor Seriake Dickson to defining the qualities the next governor of the state should possess. In fact, the incumbent governor, during an encounter with the media, also outlined the qualities his successor should possess and encouraged the people to rally round such person if they found one among the park of aspirants that have indicated interest to succeed him. According to him, his successor must be principled, bold and courageous enough to protect the interest of the Ijaw at all times, as the state cannot afford to have what he described as “an errand governor of any ethnic group.” He added: “I will be sad to see the governor of Bayelsa playing politics, without being able to take a decisive position on issues. The shoes I am leaving behind are very big.”

To underscore his stand, the governor invited all clergymen in the State to a three-day prayer and fasting programme at the Ecumenical Centre in Yenagoa, to seek God’s guidance and control of the political transition process to reveal his successor. At the end of the programme, he said that the revelation of God was that the governorship seat was strictly reserved for an individual who appreciateed the place of God in human affairs. He said the state would never again experienced governance by cult elements, crude and brutal human beings, whose stock in trade was bloodletting, killings and violence. “Let me remind us of some of the very powerful pronouncements that our men of God and fathers of our faith have led us to declare for the past seven years and still counting.  One of the most important is that only a man after God’s heart, not a man who is not destined by God, who wants to take it by violence, shall ascend the position of governor,” the governor stated.

A day after he made the pronouncement, the Special Adviser to the governor on Political Matters, Mr Feynman Wilson, in a statement said that aspirants that did not consult the Restoration Caucus (Dickson’s political family) before picking the PDP nomination form did so at their own risk. Feynman stated that after wide consultations with members of the Restoration Team, they selected three aspirants to be supported during the September 3, 2019 PDP governorship primary election in the state. he explained that they took the decision at a meeting after the fasting and prayer session organised by the state to seek the face of God on the critical issue of selecting the next gubernatorial candidate for the PDP. He gave the names of the anointed members of the Restoration Team for the race to include: the Chief of Staff, Government House, HonourableTalford Ongolo; Secretary to the State Government, KemelaOkara; and the Senator representing Bayelsa Central senatorial district, Senator DouyeDiri.

At the time the statement was issued, a former Managing Director of the Niger Delta Development Commission (NDDC), Chief Timi Alaibe; incumbent deputy governor of the state, Rear Admiral Gboribiogha John-Jonah, member representing Sagbama/Ekeremor Federal Constituency, Honourable Fred Agbedi; the immediate past Speaker of the state House of Assembly, Honourable Kombowei Benson and Dr. Nimibofa Ayawei had also picked the PDP nomination form. Ironically, they are all foundation members of the Restoration Government, led by Dickson. The statement provoked angry reactions, necessitating a meeting by the stakeholders who  resolved that all the aspirants that had obtained the nomination in the PDP should be given the opportunity to test their popularity. In other words, the party should provide a level-playing field for the aspirants.  Such contestants include Reuben Okoya; KenebiOkoko; Ambassador BoladeIgali; Franklin Osaisai; Joshua Mackiver; Senator Emmanuel Paulker; Benson Agadaga; George Ikoli and Professor Steve Azaiki.

To douse the increasing tension, the governor had to issue a fresh statement that the leadership of the PDP had not endorsed any aspirant. In the statement by his Special Adviser on Media Relations, Mr Fidelis Soriwei, Dickson was quoted to have urged Bayelsans to ignore aspirants claiming to have his endorsement.

A group, the Bayelsa PDP Restoration Foot Soldiers created a storm when it demanded an apology from Alaibe because he contested the last governorship election on the platform of APC. The publicity secretary of the group, Mr. Ebi Lawson, in a statement said, while acknowledging that Alaibe had the constitutional right to contest the forthcoming gov election in Bayelsa, alleged that Alaibe complicated the efforts of the incumbent governor and his dedicated restoration PDP members during their fight for the survival of the PDP in Bayelsa in 2015. In a counter reaction, Make-Bayelsa-Great (MBG), insisted that its principal, Alaibe, did not owe anybody apology for defecting to the APC in 2015 and deeming it fit to return to the PDP in 2019. Describing as faceless the group that called for the apology, the pro-Alaibe camp said the sponsors of the group were trying to create a wedge between the Dickson and Alaibe.

The cold war worsened when the Bayelsa State Physical Planning and Development Board (BSPPDB), sent its taskforce to pull down billboards, signposts, banners and posters across the state capital, Yenagoa on the grounds defacing the environment.  Spontaneously, the Alaibe Campaign Organisation reacted, claiming that the main target of the action was Alaibe. Also, the PDP Integrity Group protested, citing the same ground. However, the chairman of the BSPPDB, Honourable Ebi Waribigha, explained that the action had no political undertone but was carried out in line with Section 35, 78 and other relevant sections of the Bayelsa State Physical Planning and Development Law.

While the issue raged, the battle for the control of the 1,700 delegates that will vote for the candidate of their choice at the primaries has equally triggered another round of claims and counter-claims. Some alleged that the governor was planning to hijack delegates. The first to raise the alarm was the PDP Integrity, which also alleged that the leadership of the party in the state planned to alter the list of delegates. Reacting to the allegation, the publicity secretary of the PDP in the state, Mr Osom Macbere said it was untrue.

Judging from the past, apart from 1999, governorship election in Bayelsa has always been a contest against the incumbent governor. But now, an incumbent appears to have the opportunity to choose his successor.  Though Dickson had publicly denied having a preferred choice, a number of aspirants are claiming to have been anointed by him. Another obvious development is that before 2015, governorship election in the state had always been a PDP affair, with cracks among its members posing no threat at the poll. But this time, the party faces a formidable challenge from the APC. For instance, despite the fact that the PDP won the majority seats in the state Assembly in 2015, the party lost one senatorial seat, two House of Representatives seats and four state Assembly seats during the last general election in the country.

At the moment, there appears a split in the PDP in the state because of the endorsement of some aspirants by the Restoration Caucus and the removal of campaign billboards of some aspirants  by the government agency. The PDP Integrity Group and the Restoration Foot Soldiers are at each other’s throat, on the issues. This has necessitated former President Goodluck Jonathan, stepping in to stave off trouble in the party. He called on all stakeholders to exhibit restraint.  At a PDP Elders Advisory Council meeting held at the Government House, Yenagoa, the former President warned the party faithful not to pave the way for the APC to snatch the state from the PDP. He explained that the large number of aspirants showed the party as the preferred platform for the election. His words: “I need to plead with all the aspirants and political leaders that there should be no mudslinging. We must free the space and eschew rancour because finally one person will become the candidate of the party and for that one person to win the election, all aspirants must work for that person. It is only our unity that can give us victory and if we are not united, they (APC) can get away with it. For example, it took the unity of the people of Rivers State, including women who were resolute against soldiers to get the PDP victory in the state. If that had not happened, they (opposition) would have taken it. For us to secure this state for the PDP, we need maximum unity and that is why all the 21 aspirants are important to us; we must have that maximum unity; we must not create any form of division or discrimination. At the end of the day, one person will emerge and all of us will work for whoever emerges as candidate of the party”

Aside the problem of divisive utterances by the party’s stakeholders, another challenge facing PDP is the zoning of elective public offices. According to the apostles of the principle, the late D.S.P Alamieyeseigha, who hailed from Bayelsa Central, was the first beneficiary of the concept, followed by Dr Jonathan and Chief Timipre Sylva, who are all from Bayelsa East. Dickson has taken the turn for Bayelsa West, and the general feeling is that power should naturally return to Bayelsa Central.

My stolen mandate has been recovered – Uzodinma

‘Having s3x makes men more likely to believe in...

JUST IN: INEC Issues Certificate of Return to Imo...