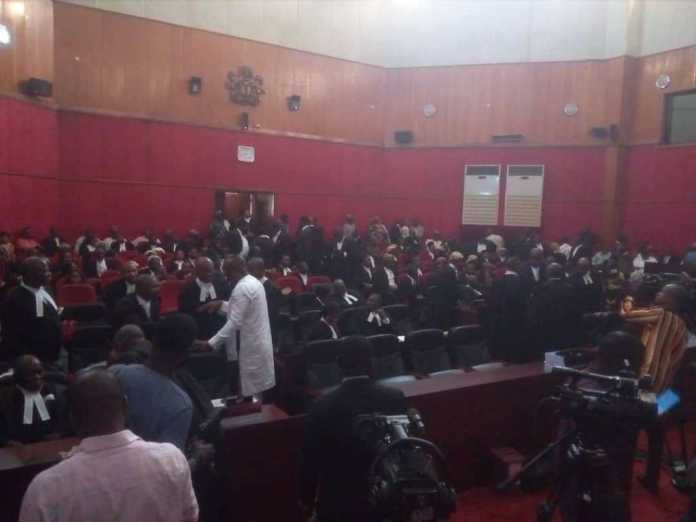 The Presidential Election Petition Tribunal sitting in Abuja has held that the petition seeking to nullify President Muhammadu Buhari’s re-election was validly and competently filed.

The Justice Mohammed Garba-led panel dismissed a motion dated April 25, which the Independent National Electoral Commission, INEC, filed to challenge the competence of the petition that was lodged by the Peoples Democratic Party, PDP, and its candidate, Atiku Abubakar.

INEC had relied on Paragraphs 4(5) and 53(5) of the First Schedule to the Electoral Act and urged the tribunal to strike out the list of witnesses and evidence that were attached to Atiku’s petition, insisting that it was not validly signed by a legal practitioner.

It contended that the name on the Nigerian Bar Association, NBA, seal that Atiku’s lawyer, Dr. Livy Uzoukwu, SAN, affixed on the petition dated March 18, deferred with the name he filled in the Supreme Court roll for lawyers.

However, the tribunal said it was satisfied that Atiku’s lawyer was validly called to the Nigerian Bar.

It held that INEC failed to controvert affidavit evidence by Uzoukwu to the effect that he was called to the Bar in 1982, served as the Attorney General of Imo State between 1994 and 1996, and was conferred the SAN rank in 1999.

Likewise, the tribunal dismissed INEC’s contention that it lacked the jurisdiction to entertain the aspect of the petition alleging that President Buhari supplied false information regarding his educational qualifications.

It held that contrary to INEC’s argument, such issue could be effectively ventilated before an election tribunal, stressing that it does not fall within pre-election matters listed under section 285(14) of the 1999 constitution.

The tribunal held that since it could be litigated before it, it was therefore not caught by the statute of limitation that made it mandatory that such issue could only be challenged within 14 days after President Buhari tendered his Form CF001 to INEC.

It held that by section 31(5) and (6) of the Electoral Act, the ground D which had to do with non-qualification of Buhari to contest the election, was both a pre-election and post-election issue that could be determined by both the tribunal and regular court.

Nevertheless, the tribunal agreed with INEC and struck out several paragraphs of the petition it said contained allegations against agencies and individuals that were not joined as parties in the matter.

It held that the paragraphs were liable to be struck out since it contained serious allegations of crime, corrupt practices, violence, unlawful interference in the electoral process, made against those that could not defend themselves.

“The court cannot make pronouncements against such persons in violation of their right to a fair hearing under section 36 of the 1999 constitution.

“The motion, therefore, succeeds only in part. Prayer 7 and 8 are accordingly granted”, the tribunal held.

It equally struck out the petitioners’ reply to INEC which included depositions relating to the issue of the disputed “Sever” through which result of the presidential election was allegedly transmitted electronically.

It held that contrary to provisions of Paragraph 16(a) and (b) of the First Schedule to the Electoral Act, the petitioners, introduced fresh facts that were not in response to INEC’s reply to the petition.