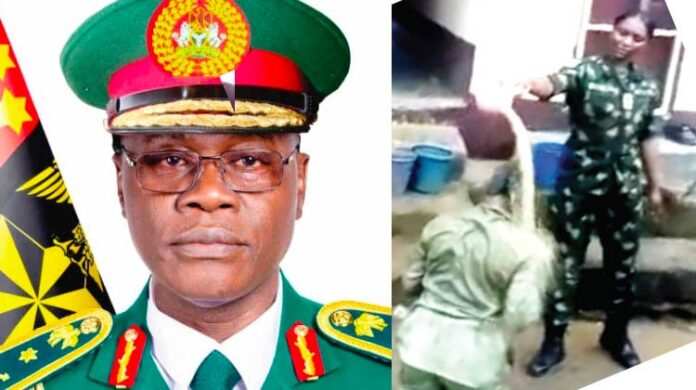 The Nigerian Army has said a female soldier, Lt. Chika Anele, seen in a viral video dehumanising a member of the National Youth Service Corps, will be tried for unprofessional conduct.

NAIJA LIVE TV gathered that a yet-to-be-identified witness recorded Anele using a bowl to scoop dirty water from a bucket and pouring same on the corps member, Ifenyinwa Ezeiruaku, who was in her uniform.

In the footage, our correspondent observed that the soldier ordered Ezeiruaku to kneel and while at it, soaked her with the dirty water.

She was also seen using the back of the bowl to hit her head.

Angered by the ill-treatment of the corps member, an activist, Agba Jalingo, who got the footage, posted it on social media.

A message attached to the post read, “This is what a commissioned female Army officer, Lt. Chika Viola Anele, did to a youth corps member, Ezeiruaku Ifeyinwa Fidelia, serving at the 13 Brigade headquarters in Calabar after having an argument.

“We understand that the leadership in 13 Brigade is working to kill the matter. Let us make (the) officer very popular for all the wrong reasons. Share the video until it gets to the Chief of Army Staff and that Chika (Anele) girl is brought to book.”

Reacting to the incident, the Director, Army Public Relations, Brigadier General Onyema Nwachukwu, described Anele’s conduct as unprofessional, adding that she would undergo regimental trial in line with the extant provisions of the Armed Forces Act.

Nwachukwu said, “The Nigerian Army has taken cognizance of a video clip currently making the rounds on social media, where a female officer was seen dehumanising a member of the National Youth Service Corps in Calabar, Cross River State. This act is not only condemnable but unprofessional and against established precepts of discipline in the NA.

“The NA therefore, condemns in strong terms, this act of gross misconduct. Undoubtedly, the officer’s actions have caused the NA monumental embarrassment and it’s highly regrettable. This unfortunate act of indiscipline does not in any way represent the NA and will not be condoned in its entirety.

“For the records, the ugly incident happened in 13 Brigade, Calabar. The brigade commander immediately instituted an investigation and the officer involved has been identified and sanctioned in the interim and would be made to undergo regimental orders (trial) in line with the extant provisions of the Armed Forces Act.”

Nwachukwu denied the allegation that the Brigade attempted to cover up the incident, adding that the Army had zero tolerance for indiscipline among its personnel.

He apologised on behalf of the Army, to the victim, her family, friends, the NYSC and Nigerians over the incident.

NYSC deploy I,500 corps members to Bayelsa, task them on Covid-19 Vaccine

Why NYSC camp in Abuja was attacked – DG Ibrahim

Why I Desperately Need A Lover — Fashion Designer,...