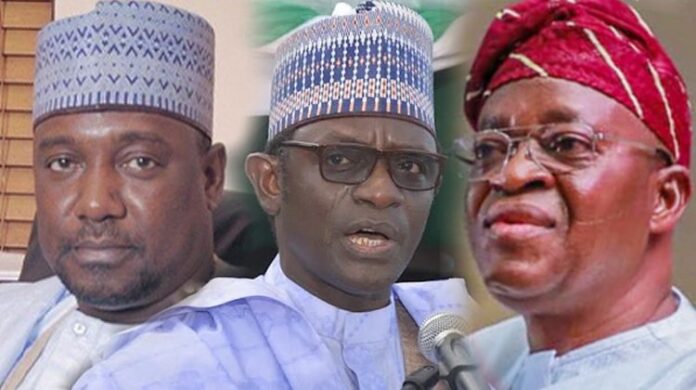 Stakeholders of the All Progressives Congress are considering an overhaul of the party’s current leadership structure to avoid a legal booby trap, NAIJA LIVE TV has learnt.

Our correspondent gathered in Abuja on Tuesday that after a meeting attended by the Vice President, Professor Yemi Osinbajo, the APC state governors and other stakeholders on Friday night, the party leaders started considering the removal of the Chairman of the Caretaker/Extraordinary National Convention Planning Committee of the party, Mai Mala Buni and other governors, who are members of the panel.

Apart from Buni, who is the Governor of Yobe State, other governors, who are members of the committee, are Sani Bello of Niger State, who is representing the North-Central and his Osun State counterpart, Isiaka Oyetola, who represents the South-West.

It was also learnt that among the plans of the party was the reconstitution of the interim panel after the removal of the governors.

The crisis in the party worsened on Tuesday as a member, Okosisi Ngwu, approached the High Court of the Federal Capital Territory and asked it to dissolve the Buni-led committee and nullify all the actions taken by it.

Recall that the APC has been divided since last week over the judgment of the Supreme Court on the 2020 Ondo State governorship election.

Although the apex court declared the state Governor and APC candidate, Rotimi Akeredolu, SAN, winner of the election and dismissed the appeal filed by the candidate of the Peoples Democratic Party, Eyitayo Jegede, SAN, members of the ruling party were divided over the pronouncement of the justices on the Buni chairmanship.

While Minister of Labour and Employment, Festus Keyamo (SAN), advised the party to suspend the ward congress it held on Saturday on the grounds that the apex court had invalidated Buni’s chairmanship, the lead counsel for the APC in the governorship suit, Adeniyi Akintola (SAN), said the judgment of the majority of the apex court justices did not annul Buni’s chairmanship.

Contrary to the advice of Keyamo and some others members, the party went ahead to hold its ward congress on Saturday, despite the warning that it could be annulled in future because of the judgment.

NAIJA LIVE TV had on Tuesday reported that Osinbajo and the APC governors had begun talks as fear gripped the party over the implication of the judgment.

A member of the party’s National Caucus, who confided in our correspondent on Tuesday, said, “We are only waiting for the President to return to hold a National Executive Committee meeting to review the state of the party.

“The court judgment in the Ondo matter as it relates to the position of the law regarding the chairman of our caretaker committee holding the office while at the same time serving as governor has set us thinking.

“We have two options, continue and risk everything or make adjustments and save something.

“What is currently on the table is to reconstitute the Caretaker/Extraordinary National Convention Planning Committee, while retaining members who are not holding executive positions like those of governors.

“There is also a proposal to either pick an acting interim national chairman from among the members or nominate a strong hand who will lead the party into the convention.

“Recall the arrangement we had in 2014 when Chief Bisi Akande served as interim national chairman and led us into the national convention where Chief Odigie-Oyegun was elected as substantive chairman.”

There were also speculations on Tuesday that plans were underway to annul last Saturday’s Ward Congress. However, multiple party sources said this was unlikely.

One of the leaders who also spoke in confidence said, “This is unlikely. Let me ask, on what grounds will such an action be taken? Those who felt shortchanged are the people pushing this kind of narrative.

“Governor Mai Mala Buni did not sign any of the notices for the congresses, go and look at the guidelines we sent out. It was mostly the Acting National Secretary, Senator John Akpanudoedehe who signed them. In a few cases, it was the organising secretary.

“Our advice to members who feel shortchanged and believe they have a strong case is to go and prepare for appeal.

“After the Appeal for ward congresses, the local government congress will follow.”

Recall that in their judgment affirming the election of Akeredolu, justices of the Supreme Court reportedly reiterated the provisions of Section 183 of the Constitution of the Federal Republic of Nigeria, 1999 (as amended).

The section reads, “The governor shall not, during the period when he holds office, hold any other executive office or paid employment in any capacity whatsoever.”

Meanwhile, the party’s National Secretary, Senator John Akpanudoedehe, has reiterated the party’s determination to proceed with its programmes despite some hiccups during the ward congress held last Saturday.

He said, “Some people are used to sitting in the comfort of their rooms to write out names. But we now have a system where party members at all levels will determine their leaders.

“We don’t have factions in the party. We have tendencies and we encourage consensus. People have interests and people can come together and reach a consensus.

“We can arrive at a consensus when leaders of the various tendencies come together and agree on something. If there is no agreement, it is then we vote. It is democratic. The voting is monitored by all the government agencies and the results so generated at such congresses; INEC (the Independent National Electoral Commission) will have its copies.

On the issue of last Saturday’s ward congress, he said, “There was no Supreme Court judgment barring us from holding our congresses. Before the caretaker committee was set up, most of the Senior Advocates of Nigeria talking today were part of the legal team that looked at the constitution and gave the go-ahead for its composition.”

He also explained that the party was preparing to entertain appeals from aggrieved members. Akpanudoedehe said, “If we find genuine infractions big enough to order a fresh congress, we will do so but we will not entertain results from parallel congresses.”

The secretary attributed the crisis within the party to power tussles ahead of the 2023 elections.

He said “All of these things you are seeing today is all about 2023. We all must first have a party before we struggle for any position. We must not destroy this party because we don’t get what we want.”

Why i said I would rather die than join APC or bow to Buhari – Fani-Kayode Explains …Says, I Was Wrong In The Past...

THROWBACK: I would rather die than join APC or bow to Buhari – Fani-Kayode