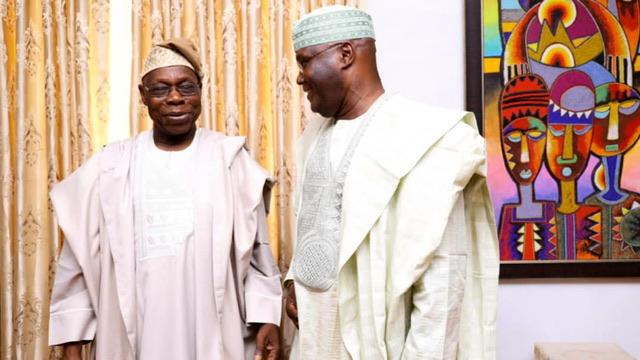 As the general elections draw closer, the All Progressives Congress presidential campaign council (APC PCC) has demanded the immediate arrest of former President Olusegun Obasanjo and the presidential candidate of the opposition peoples democratic party (PDP) Atiku Abubakar over the alleged pilferage of the marine float account running into billions of naira.

At a press conference jointly addressed by members of the media directorates in Abuja, the council reiterated the call on Atiku Abubakar to step down from the presidential race over his role in the alleged infraction recently publicised by a whistle-blower, Mr Michael Achimugu.

Mr. Festus Keyamo, SAN, Director, Public Affairs and Chief Spokesperson of the group maintained that Atiku lacked the moral latitude to occupy the exalted seat of the presidency based on his alleged role in the saga.

The council maintained that the duo breached the code of conduct for public officers, and committed the offences of conspiracy, criminal breach of trust and money laundering over their alleged role on the marine float account.

The APC PCC enjoined security agencies to recover all monies allegedly stolen from the marine float account by the duo and several other collaborators exposed in the voice note by the whistle blower.

“The issue of the Marine Float Account is not new to Nigerians. In the voice note, Alhaji Atiku Abubakar can be heard boasting that the issue of that account was thoroughly investigated by EFCC, yet then he was smart enough to escape,” the council alleged.

“However, we note that in 2006, at the height of his public quarrel with Obasanjo over the sharing of money, the same PDP officially asked Atiku Abubakar to refund N500million taken from that account.

“In the circumstance, since the nation now knows that the Marine Float Account and other similar accounts were ‘SPV’ accounts, it follows that all payments made into that account were monies stolen from the public coffers. Therefore, we call on all security agencies to recover all monies withdrawn from that account by anyone for that matter.

“In the light of these very grave revelations, we call on Atiku Abubakar to immediately tender an unreserved apology to the Nigerian people and step down from the Presidential race forthwith, whilst handing himself over to the law enforcement agencies.

“What is now clear to the Nigerian people is that between 1999 and 2007: President Obasanjo and Atiku ran a criminal enterprise and an empire of fraud in Abuja at the same time Asiwaju Bola Tinubu was toiling very hard, dutifully and meticulously laying the foundation to rebuild Lagos State.

“That following these revelations, it becomes clear that Atiku Abubakar has absolutely nothing to campaign on again as the period of 1999 – 2007 that he always relies on can now be described by Nigerians as the “SPV years” when they ran Nigeria aground.

“That whilst President Obasanjo and Atiku deprived the good people of Lagos State their Local Government monthly allocations even after the Supreme Court ordered the release of the funds, they were busy stealing the nation’s resources by stealth in Abuja.

“That the real, dark reason for the seemingly irreconcilable quarrel between President Obasanjo and Atiku Abubakar is disagreement over monies they both stole in the ‘SPV’ accounts at that time.”

The council called on all well-meaning Nigerians and the law-enforcement agencies to protect Achimugu stressing no harm must befall him or members of his family.

It added: “We suspect that some goons of Atiku Abubakar are planning to eliminate him and harm members of his family. We shall hold Atiku Abubakar responsible if anything befalls this patriotic Nigerian or members of his family. We also encourage him to reveal to Nigerians those “earth-shaking” revelations he is withholding for the sake of this nation and the future of our children.”

Obasanjo denies writing UK to back off Nigeria’s 2023 election