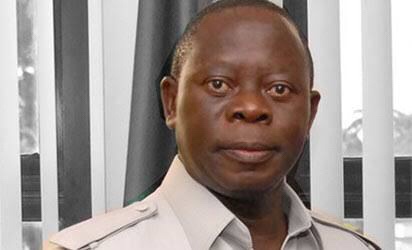 Former governor of Edo State and frontline contender for the office of the national chairmanship of the governing All Progressives Congress (APC), Comrade Adams Oshiomhole, assured yesterday that the crisis the party is currently enmeshed in will not lead to its implosion as widely speculated.

According to him, even though the peculiar nature of forming a political party necessitates that there would be some points of divergence, such internal disagreements often lead to the attainment of corporate good.

The former Labour leader assured however that if given the chance to lead the APC as its national chairman, he will adopt a bottom-up approach where all the concerns of stakeholders will be considered in taking major policy decisions that will impact positively on the party.

Oshiomhole who spoke when he paid a familiarisation visit to the corporate headquarters of LEADERSHIP Group Limited in Abuja also lent his voice to the ongoing debate on review of the current revenue allocation formula and devolution of power, insisting that it will give additional responsibilities to states.

He maintained that speculation about impending implosion remains what it is, even as he said it was not the first time people would whenever there is a seeming internal squabble within a political party.

Oshiomhole added that is common for analysts and observers and spectators to raise the alarm that an impending implosion is inevitable.

He said, “I believe that APC has been formed by men and women and seasoned politicians who over the years have come to the conclusion that for Nigeria’s democracy to flourish, we must move away from having just one party after the 1999 elections which was conducted by the military.

“Beginning with the elections the then ruling party manipulated and co-opted everybody that was co-optable, compromised everyone that was available for procurement and in the process neutralised the opposition and forcefully took over the AD from the South-West.

It planted internal contradictions in the ANPP by co-opting its chairman as an advisor to then President Obasanjo and took other measures that were designed to make sure that they were no viable opposition.

“The result of this was that we had a fragmented opposition with a very powerful ruling party and a president who was battling to understand between a military head of state and elected president who must function according to rules and laws, who has executive powers but not legislative and judicial powers.

“We can argue to what extent the party has bonded because, we can say that they should have been an organic reaction after the merger leading to a cohesive, virile political party. Some may say it is a physical reaction where the different parts seem to be wobbling and are not able to bond and these are the manifestations in some of the crises you have seen here and there.

“But any party that is tilted towards the progressives, that is pro-people, that is not governed by one god father, people who feel that they are equals in a voluntary association are bound to engage in internal contestation, even when they agree on the objectives and the destination. It is always a viable thing to have a debate around various policy choices and tools available even to arrive at the destination, which is not in dispute.

This doesn’t necessarily lead to implosion.” On the method he thinks will end the current bickering within the party, Oshiomhole said the way out is an all inclusive, bottom-up approach to leadership and decision making as well as ensuring that organs of the party function.

“If I have the mandate of the appropriate organ of the APC on any particular matter, everyone elected on the platform of the party, whether as a party or government official, whether legislative or executive, on the basis of that decision we will enforce the party position because the party position represents the views of everyone.”

“For example, I have difficulty with the issue of federal roads because there are no federal people. I want a situation where if I go to a state and the roads are good, I know the governor is doing something about it and if they are bad, I shout the name of the governor.

“I believe that there are things that are straight forward, but the one that is ethnic-driven, I have something against it. I think we should do devolution of powers and we should review the revenue allocation formula and there are some indices there that should be removed which are being manipulated by corrupt people”.