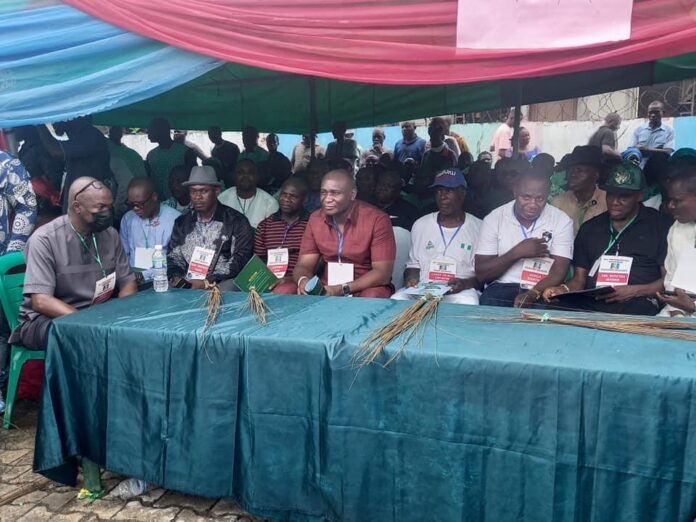 But the faction of the party led by former Minister of Agriculture and Rural Development, Senator Heineken Lokpobiri however boycotted the exercise, citing the subsisting injunction before a Court of Appeal sitting in Port Harcourt, Rivers State.

The Conduct of the State Congress which was held at the State Party secretariat located along the Mbiama/Yenagoa Road witnessed the presence of major stakeholders led by the Senator Degi Eremienyo, two members of Federal House of Representative, Hon. Isreal Sunny-Goli and Hon. Preye Influence Oseke.

However, the Leader of the Party in the State and Minister of State for Petroleum Resources, Chief Timipre Sylva was absent for unexplained reasons.

The Chairman of the 7-man State Congress Committee, DCP Yusuf Aurelius Adejo (Rtd), described the conduct of the State Congress as a family affair and was peaceful.

Also Speaking, the member representing Southern Ijaw Federal Constituency, Hon. Preye Oseke commended the conduct of the exercise, predicting that the emergence of Barr. Otiotio as the Chairman of the Party will lead to the emergence of new APC and rejuvenated party in the State.

According to him, “As a season lawyer, politician and adminisrator, Barr. Otiotio will reach out to all stakeholders are carried along in the affairs of the party. To those that are agrrieved in all states of the federation, I want to admonish them that APC is a grassroot, socialists and participatory party where the people matter most than we that lead them. “

” And I believe that with the people behind us, the APC will win the 2023 elections. In Bayelsa, we worked hard in 2019 and we won. Now that it later became a PDP state, we will not stop at winning the Governorship election in 2023.”

However at the factional secretariat of the APC located at the Dimrose junction, LEADERSHIP observed that there was no parallel Congress being held as planned.

When contacted for comment, the State Chairman of the Senator Lokpobiri led faction, Fala Itubo, said “how can we conduct congresses when there is a subsisting court injunction? You remember what happened in River State? We don’t want to make that same mistake.

“As for the reconciliation committee set up by our party leadership at the national level, whatever they want to do must not be about the Minister of State for Petroleum and Natural Resources, Chief Timipre Sylva, and Senator Lokpobiri alone but should involve all stakeholders of the party. I wish to appeal to all party faithfuls to remain calm.”

A Chairmanship candidate in the Lokpobiri led camp, Chief Peres Peretu, said “we met and thought it wise not to go ahead of the congresses because of the subsisting injunction. For all I know, the other party is disobeying court order.”

Peretu said congress is despite a subsisting restraining order of the Yenagoa High Court and the Court of Appeal , Port-Harcourt .

” As a law abiding citizen of Nigeria , more so as a legal practitioner I know the implication if disobeying court orders or doing anything contrary to Court orders and directives.”

“This write up therefore is deliberately and purposely intended to assert that I have NOTHING whatsoever to do with the purported APC state congress holding in yenagoa, Bayelsa state today.”

Also, a Chieftain of the party, Hon. Sunday Frank-Oputu, explained that the refusal of the party to conduct a parallel Congress was due to a subsisting Court order, “when we appeared in court, council to the other faction claimed that they have not conducted any Ward or Local Government congresses. So, if they have not done so, where did they get the delegates voting at the state congress they are conducting?”

“We have evidence of that brief their council made those claims. And the appeal court has asked both parties to return to return to court on the 19th October, 2021 for hearing. For that reason, we have decided to put off the congresses” .