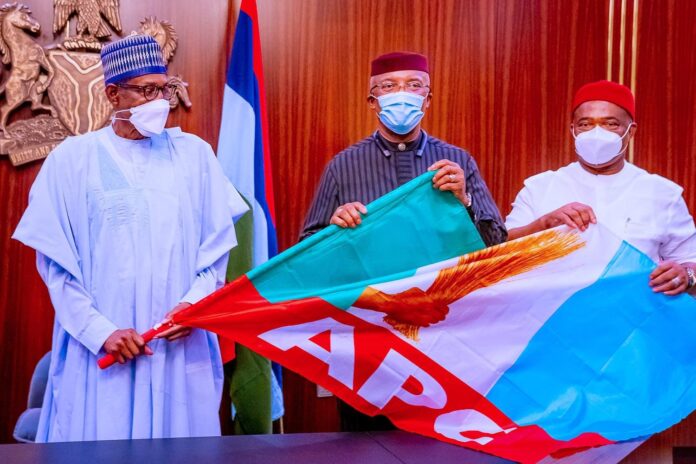 The news now is that the deputy governor of Anambra State, Dr Nkem Okeke has joined the APC ahead of the November 6 Anambra state governorship election.

He was led by APC Caretaker Committee Chairman, Mai Mala Buni, to meet with President Muhammadu Buhari, where he officially decamped to APC.

NAIJA LIVE TV gathered that a delegation of APC leaders led by Senator Andy Uba stormed the Ngozika Estate home of the deputy governor last week to drag him to APC.

A source at the meeting told our correspondent that APC took the advantage of our report published a few days ago on the plights of the Deputy governor in the hands of Gov Obiano and his wife to storm his home this evening to compel him to declare for the party.

An insider said the delegation promised to pay the deputy governor all the entitlements seized by gov Obiano if he officially declares for APC. They also assured him that President Buhari was already aware of his intention to dump APGA and would be happy to receive him at the villa.

Another source told this Online News Platform that those who stormed the Deputy Governor’s home to drag him to APC are Senator Andy Uba, APC’s governorship candidate, his running mate, Barr Emeka Okafor, his campaign DG, Chief Paul Chukwuma among others.

Fanwo Splashes N680k on Students who excelled in...