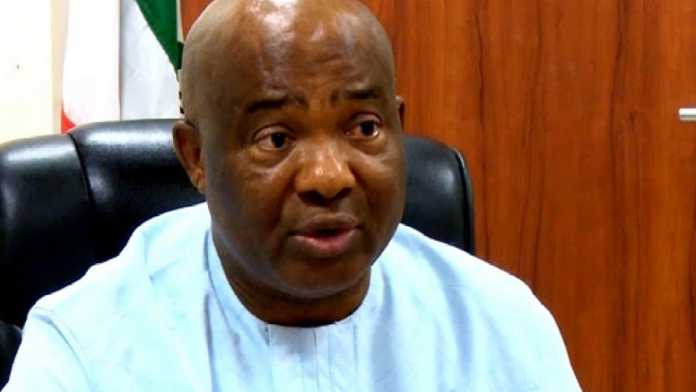 The Governor of Imo State, Hope Uzodinma, has denied issuing a statement, which claimed the late Chief of Staff to President Muhammadu Buhari, Abba Kyari, made him governor.

Kyari, who died from complications of COVID-19 on Friday, was buried at Gudu Cemetery in Abuja on Saturday.

However, reports emerged online that Uzodinma, in his condolence message to the president, said he would immortalise the late Kyari over the role he played in his emergence as governor.

But, in a statement on Monday, the Chief Press Secretary to the Governor, Oguwike Nwachuku, insisted Kyari never made Uzodinma governor.

“Since last weekend that Kyari passed on, the same persons have been issuing press statements, forging the logo of the government and the name of Mr. Nwachuku with the intent to deceive Imolites in particular and the public in general into believing their propaganda and fake news to be real.

“In one of such fake statements they issued and also circulated on social media, they mischievously credited Governor Uzodimma to have said he would immortalise Kyari for “making him Governor.”

“How would any person believe the complete trash that Governor Uzodimma will in a condolence letter say that the late Chief of Staff to the President made him governor of Imo State?

“It was their desperation to deepen the propaganda and criminal intents that drove them to the latest fake news of purported renaming of Imo State University after Kyari, something that only exists in the imagination of their tiny brain’s imagination.

“For the avoidance of doubt, let it be known that the two statements in reference were not issued by the office of the CPS/Media Adviser.

“We also advise the reading public to take fake news seriously and make conscious efforts to identify the promoters and ensure that they join others who stand against fake news globally to make their trade unattractive,” the statement read.

2023: Fear In Uzodimma’s Camp As Ihedioha Promises To Return As Governor Of Imo State