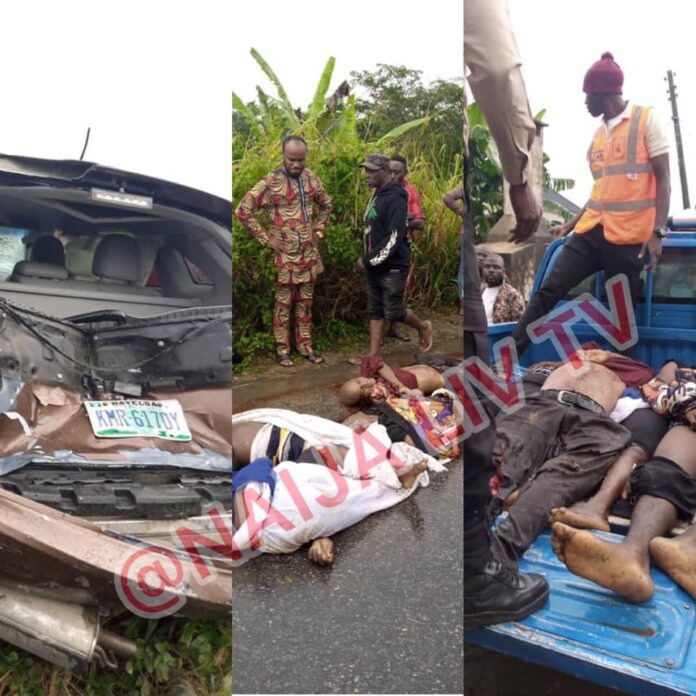 No fewer than five persons have died in Yenagoa, the Bayelsa State capital, in a ghastly motor accident along the Tombia-Amassoma Road area of the state.

The accident, which caused traffic gridlock along the road leading to the state-owned Niger Delta University, NDU, and the Bayelsa International Airport, left three female and two male victims dead.

The spokesman of the Bayelsa Police Command, Asinim Butswat, who confirmed the development yesterday, said the fatal motor accident occurred on Thursday at about 4.40pm and involved a Toyota Venza with Reg. N0. KMK 617 BY and two Tricycles with Reg. No. NSK 073 QH and LND 223 QH.

According to him, “Five corpses were evacuated from the scene and three of them have been identified as, Okon Daniel ‘m’ 47 years, Oweinkuro Profit ‘m’ 52 years and Mrs. Domoye Ikpaipai ‘f’ 73 years.

The others two corpses are a middle aged male and female”.

One of the victim have also been identified as a staff of the popular hangout in the Bayelsa State capital, Axters and a student of the State owned Niger Delta University, Amassoma.

Butswat however told NAIJA LIVE TV that an police operatives are on the trail of one Buthurst Augusta Nyoun , who drove the Toyota Venza that allegedly caused the accident and absconded from the scene.The Police have launched manhunt for the accused female who drove the Venza for possible culpable homicide. Investigation is ongoing to arrest the fleeing woman, “The sketch marks of the scene of the accident have been taken and investigation is ongoing”

Also an official of the Federal Road Safety Corps in the Bayelsa Sector Command, Mr. Soroh Tonye, who confirmed the number of causalities to our correspondent, said that four persons died on the spot, while another victim died on the way to the hospital.

The FRSC also attributed the probable cause to be over speeding during the rainfall. At the time of filing this report, no one was yet to ascertain the identities of the deceased victims. Other victims of the accident are currently receiving treatment at the Niger Delta University Teaching Hospital in Okolobiri under Yenagoa Local Government area of the state.