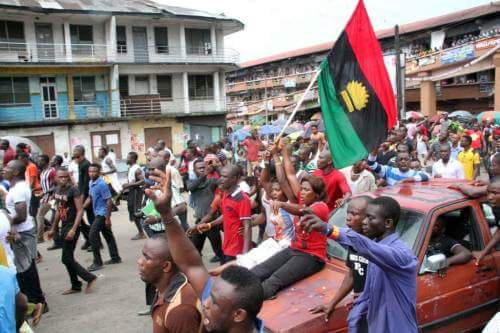 #NaijaLiveTv
At least 22 members of the Biafran Zionists Federation (BZF) were arrested by security operatives on Wednesday as they sought to take over the Enugu State Government House to hoist the Biafran flag.

Benjamin Onwuka, a lawyer and leader of the BZF, had earlier announced plans to commemorate the ‘Biafra Day’ by hoisting the flag of the defunct Republic of Biafra at the Government House.

Onwuka had gone as far as vowing that “not even fighter jets” would stop him from realising the mission.

At about 7am on ‘Biafra Day’, he and scores of his followers trooped towards the Government House, Enugu, bearing Biafran flags and musical instruments with which they hoped to celebrate the success of the mission.

However, they were arrested by men of the Nigeria Police Force (NPF) and the Department of State Services (DSS) before they could even reach the gates of the Government House. Although at least 22 were arrested, several others escaped.

Confirming the development, Ebere Amaraizu, Public Relations Officer of the Police in Enugu State, said Onwuka, who had previously been prosecuted for a similar offence, was in the custody of the Police and would soon be arraigned.

Onwuka’s BZF had previously made attempts to declare the independence of Biafra. After leading some BZF members to invade the studios of the Enugu State Broadcasting Service in a botched bid to announce the secession of Biafra on June 5, 2014, Onwuka was arrested, detained and tried for treason.

Reacting to the arrest, Ambrose Ugwu, deputy leader of the group, warned that south-east governors would face the wrath of the United States and other international allies of the pro-Biafra group if Onwuka was not released immediately.

“Peace-loving Zionists were today treated like common criminals by the Police, who were doing the bidding of the South-East governors,” he said.

“They beat our members, including our commander, like criminals. What happened today is very condemnable. We hold south-east governors responsible. There is collaboration among the five of them to crush the pro-Biafran agitators. But we are not going be cowed.

“We are giving them an ultimatum to release them immediately. Failure to do so, they will have the United States and our other international allies to contend with.”

Biafra supporters commemorated the ‘Biafra Day’ on Wednesday, May 30, with a sit-at-home order by the Indigenous people of Biafra (IPOB). Although it was observed in many parts of the south-east, a few others ignored it, instead going about their normal businesses.

Fayose ‘A Pompous Martinet With A Huge Ego’, Says Dayo Adeyeye As He Dumps PDP For APC
19 Comments 1 Day Ago

Orji Kalu’s Trial For ‘Laundering N3.2bn’ To Continue In June After No-Case Submissions
5 Comments 16 Hours Ago

Sowore: Saraki Will Refund Our Money With Interest… And He Will Go To jail
113 Comments 3 Days Ago

SaharaReporters.com is an outstanding, groundbreaking news website that encourages citizen journalists to report ongoing corruption and government malfeasance in Africa. Using photos, text, and video dynamically, the site informs and prompts concerned African citizens and activists globally to act, denouncing officially-sanctioned corruption, the material impoverishment of its citizenry, defilement of the environment, and the callous disregard of the democratic principles enshrined in the constitution.