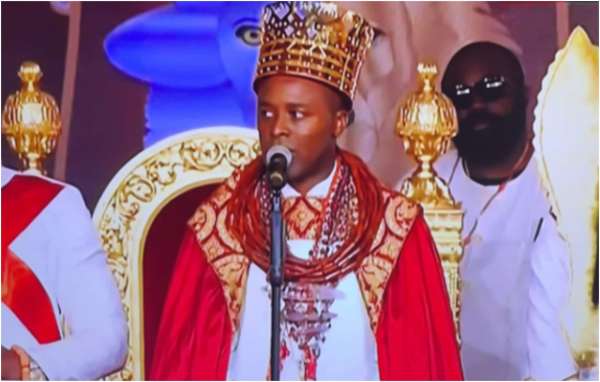 The 21st Olu of Warri, Ogiame Atuwatse III, has reversed an ancestral curse placed on Nigeria by his grandfather, Olu Erejuwa II, as a result of alleged injustice meted to him.

He was the 18th Olu of Warri Kingdom with the title Ogiame Erejuwa II.

The new Olu of Warri, Ogiame Atuwatse III, reversed his grandfather’s curse on Saturday during his coronation.

Said he, “As the spiritual, cultural, political, and traditional ruler of this land, I, Ogiame Atuwatse III, the 21st Olu of Warri, the first son of Olu Atuwatse II, the grandson of and direct descendant of Olu Erejuwa II who was offended on this throne, hereby reverse the curse placed over this land.

“In its place, I release forgiveness and healing to the Federal Government of Nigeria whose might was used to propagate that offence; and I decree unprecedented and an uncommon peace, prosperity, progress, and development upon this land.

“I bring down the government of heaven unto this land and I direct it to flow as a course that can neither be sabotaged, slowed, nor stopped.

The new Olu of Warri in his coronation address extolled the virtues of the Itsekiris at home and in the Diaspora, promising that his Kingdom would soon emerge with progressive policies to rebrand the rich Itsekiri historical and cultural heritage with a view to developing their socioeconomic potentialities.

In this regard, he pledged to be focused “as the spiritual, cultural, political and traditional ruler of Warri Kingdom.”

He assured the youths and women of Warri Kingdom of better days ahead, promising to do everything possible to support in developing them to their potential excellence.

The Atuwatse III described his coming not just as a divine visitation but also as divine habitation, insisting that his emergence is “God’s project.”

Commenting on the stolen 500-year-old Warri crown, the new Olu of Warri urged the sons and daughters of the Kingdom not to despair over the ugly development; but to rather see it as part of the manifestation of the divine glory of the Kingdom.

He said, “The taboo that was made by our old crown has made way for a brand newgold crown, good only for the modernities of the present age.

“From the era of coral to teracota, to silver, and now gold. The reality of the moment can only signify the forthcoming economicmanifestation of our people, God willing.”

The Ogiame called on all sons and daughters of Warri to join force with him in repositioning the Kingdom to greater heights.

If you’re not rich, to enjoy life have more wives – Says, husband who married two wives in same day

We Are Suffocating, Reps Hurriedly Adjourn Plenary Over Breakdown...

The Reason Osita Iheme Is Not Married Despite The...