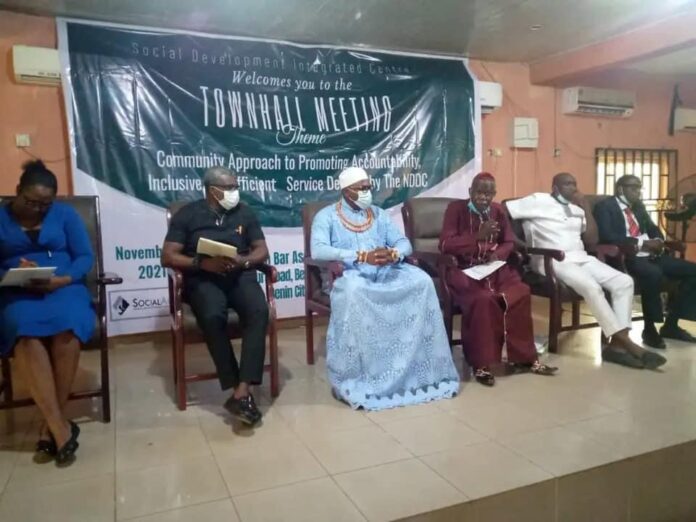 21 years after the Niger Delta Development Commission, NDDC, a Commission saddled with the responsibility of developing the region was established, the region remains underdeveloped and still agitating for development as it used to be 21 years ago.

Programme coordinator, Social Action, Isaac Botti, made this saddening submission in Benin on behalf of the Managing Director of the body in a Town Hall Meeting organised by Social Action with support from MacArthur Foundation.

The Town Hall Meeting, with the theme: ‘Community Approach to Promoting Accountability, Inclusive and Efficient Service Delivery by the NDDC’ was aimed at enlightening members of the public on the need to be involved in the preparation and implementation of the NDDC budget and the need for them to engaging the Commssion in execution of project in their locality.

In his opening remarks, Botti lamented that despite generating over N100 trillion to the federation account in the past few years, the Niger Delta region which generated such huge amount has nothing to show for it.

While adding that the NDDC has failed woefully in its mandate of developing the region in terms of infrastructure and social amenities, Botti lamented that the Niger Delta of today was not what the founders of NDDC envisioned when they established the Commission.

“The Niger Delta where over 100trillion has come out as revenue for the government, is far from development. The Niger Delta we have today is not what was envisioned when this Commission was set up 21 years ago.

“When the NDDC was set up 21 years ago, we were of the hope that by 2020, we will have a Niger Delta of the same standard of Infrastructure, same quality of life like Dubai but unfortunately, 21 years after, we are faced with that sad reality – development is still far from us,” he lamented.

He blamed the citizenry for being part of the problem in terms of NDDC failure in developing the region by not holding the Commission responsible and not asking questions on some projects executed by the NDDC in their domains.

“We want to strengthen citizens participation in NDDC budget process and its implementation,” he said.

They also berrated the Commission for not involving communities whenever projects are being executed in such communities.