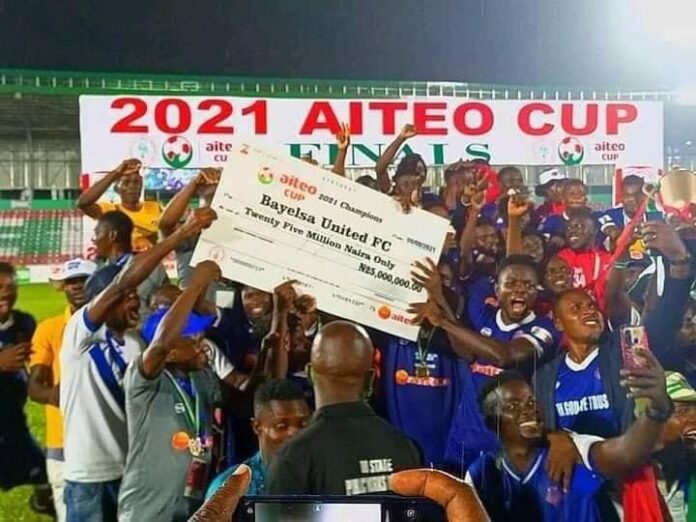 Bayelsa State Government is to declare a public holiday in the State in honour of Bayelsa Queens and Bayelsa United following their emergence as Champions of the Men and Women’s competitions of the 2021 AITEO Cup.

Governor Douye Diri made this known when he visited players and officials of Bayelsa Queens and Bayelsa United in the teams’ camp in Benin City shortly after their victories in the tournament.

The Governor who was represented by his Deputy, Senator Lawrence Ewhrudjakpo praised the heroic achievements of the teams, describing them as heroes and heroines that Bayelsans are proud of.

Senator Diri said the success of Bayelsa Queens and Bayelsa United were as a result of the handiwork of God and the dedication and commitment of the players and officials of the teams as well as the prayers and support of the people of the State.

Ewhrudjakpo said: “His Excellency has said because of what you have done we are going to declare a Public Holiday in Bayelsa State to receive and welcome you back home.I told you that the spirit of Bayelsa is never intimidated, never conquered.

“His Excellency said I should wish you all the best and send his congratulations  to you. He has spoken to us all this night.So we are here as a mark of further support to you. So relax and enjoy yourselves this night after your great achievements”

‘We want to give thanks and glory to God Almighty for this double victory. God has again performed His miracle. When we say we are the Miracle Governor and Deputy Governor People thought we were joking.

“We said we were coming to Benin to win the two Cups and that is what we have done. The Governor told me go there, conquer and return and we have come, we have conquered and we are returning”.

Also, the Senator representing Bayelsa Central Senatorial District, Senator Moses Cleopas noted that the victory of the teams was as a result of the mercies of God, hailing the team for preparing adequately for the triumph.

According to Senator Cleopas, both teams had written their names in gold and the people of Bayelsa State and Nigeria will not forget them.

The member representing Kolokuma-Opokuma Constituency One in the State House of Assembly, Rt. Hon. Tonye Isenah praised the team for their hardwork, describing their victory as success meeting preparation with a crowning by God.

He explained that the Speaker of the House of Assembly, Rt. Hon. Abraham Ngobere was pleased and excited with the achievement.

Chairman of the House of Assembly Committee on Sports and member representing Ekeremor Constituency One, Tare Porri congratulated the teams for the double victory which he described as unprecedented in the history of the State, asserting that it was a justification of the Appropriation made to the clubs by the Assembly.

He pledged that all that is needed to support for the teams to succeed next season would be duly appropriated.

Permanent Secretary of the Ministry of Sports, Mr. Mightyman Ayekuro stressed that the double honours achieved by the teams in the AITEO Cup has made Bayelsa the capital of football in the country, emphasizing that the secret of the success story was the motivation by Governor Douye Diri and the Deputy Governor, Lawrence Ewhrudjakpo.

On the delegation of the Deputy Governor to the AITEO Cup final were five Commissioners, ten House of Assembly members, state Chairman of the Peoples Democratic Party, Mr Solomon Aguanana and other top officials of the state government.

Both State owned teams made history at the Samuel Ogbemudia Stadium, Benin City, venue of the final match by clinching the titles for the first time as Bayelsa Queens defeated FC Robo Queens of Lagos 4-2 while Bayelsa United triumphed 4-3 on penalty shoot outs against Nasarawa United after both teams battled to a thrilling 2-2 draw in regulation time.

The only Bayelsa State based team to have previously won the competition formerly known as Federation, FA, Challenge and Governor’s Cup were Ocean Boys who beat Gombe United 7-6 on penalties after a 2-2 regulation time scores.