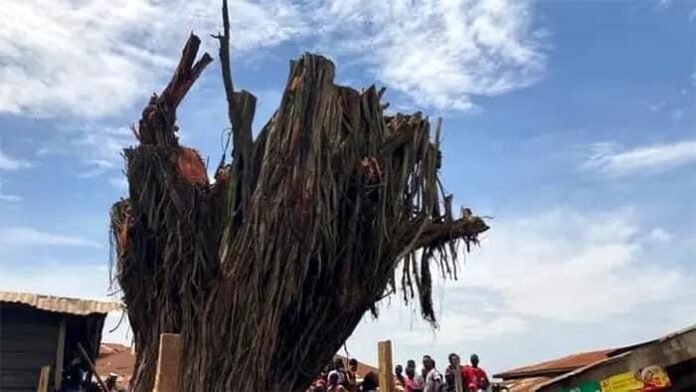 The 100-year-old tree that fell on Monday due to heavy windstorm at Sabo area of Oyo in Oyo State, leaving four people dead, has reportedly risen again.

Sources confirmed to NAIJA LIVE TV that the fallen tree rose back mysteriously on Tuesday, after all its branches had been hewn off.

A driver, Saheed Balogun, who witnessed the incident, explained that he was loading his vehicle at the park not far from the tree, when there was a loud vibration from the tree and it went back to its standing position.

“It was in my presence. I was loading my car and then the tree started shaking, next thing it stood up again,” he said

Pictures and video taken at the scene of the event had confirmed earlier that the tree was uprooted and it branches trimmed.

Oba Lamidi Adeyemi, the Alaafin of Oyo, was said to have gone to the scene to commiserate with the families of the people, who died when the tree fell on its victims.

Contacted, Bode Durojaye, the monarch’s media aide, said that the king went to the scene to commiserate with the bereaved families and to see the alleged wonder.

Durojaye said: “He went there. The fallen tree rose back again mysteriously.

“Kabiyesi condoled with the people there over the sad incident.”