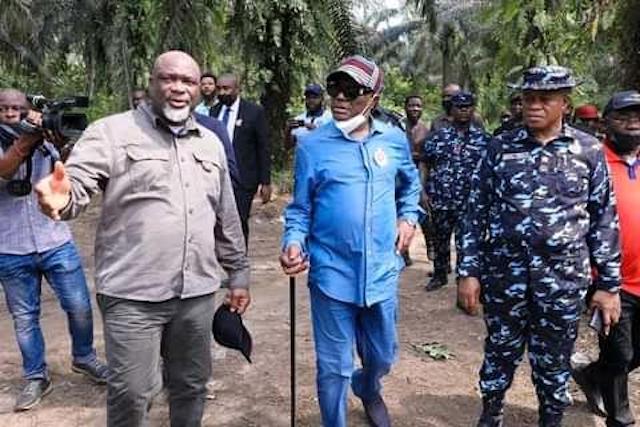 Governor Nyesom Wike has lambasted security agencies for the role of their personnel in aiding and providing cover for the operators of the illegal refineries in the state.

The governor who is concerned about the soot pollution in the state named the DPO in Emohua Local Government Area as one of the operators of illegal refineries in the area.

“It’s unfortunate for this country how security people will be involved in illegal bunkering. I can’t believe it. Mr. CP, I thank you for transferring the DPO in Rumuji, who owns a refinery. But the man must leave here, not transferred. He must leave this state.

“I can’t be governor here and security man owns an illegal refinery. No, it is not possible, the man has to go. Take him to wherever they allow bunkering,” he said.

He directed the CP to immediately arrest Chief W. J. Wocha, Fubara Ohaka, and Chief Promise Ezekwe, who have been fingered for operating illegal refineries deep inside the forest of Ibaa community in Emohua Local Government Area.

The governor further urged Commandant of the Nigeria Security and Civil Defence Corps, Rivers State command, to immediately transfer its personnel in charge of vandalisation of pipelines in the State.

“Transfer the man, and tell him to leave. He is a complete saboteur. I mean, how can security men be the one involved in this. What kind of country are we?”

“It doesn’t matter how highly placed you are. If you like be the paramount ruler. In fact, any traditional ruler that is involved, pick him for me. Let him understand that the law does not respect anybody.”

He said the purpose of confronting this havoc is to ensure that the health of Rivers people is not further hampered by those illegal refining activities.

“If not, our people will continue to die. Even you, you’re not safe from related sicknesses like cancer. All those products in the houses; You must go after them, they must tell you where they got the products. Enough is enough.

“Look at what is happening, they are dying. I want to live. So, we must stop this illegal refinery activities.