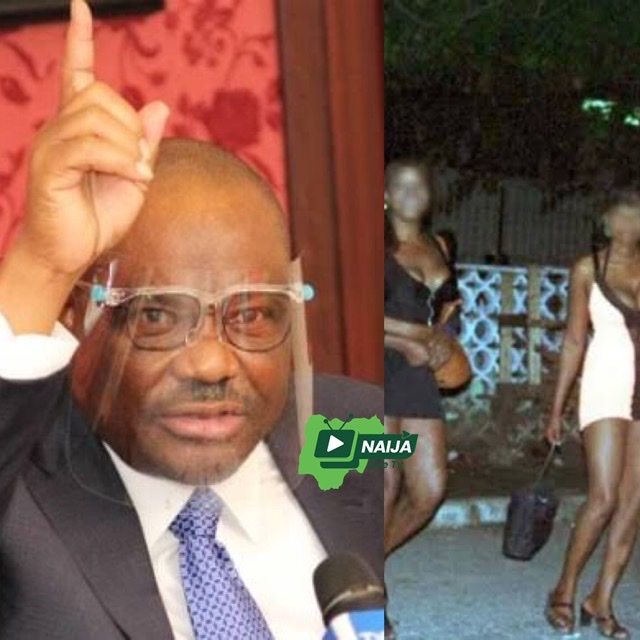 He said: “No responsible government should continue to tolerate open display and solicitation of sexual services, drug abuse and public intoxication that take place on streets and in public areas around some of these nightclubs, lounges and bars by youths; some under 14 years.”

The governor, while pronouncing the ban as part of his new year message, also threatened to replace first-class monarchs, who were fond of not attending state functions.

“Should they, therefore, continue to absent from state functions or regular meetings and activities of the Traditional Rulers Council, we will have no option, but to direct their replacement.”

He said the government would from the second week of January begin demolition of shanties and makeshift structures at crime hotspots in Port Harcourt, particularly Illabuchi area of Diobu, to sustain peace.

The governor said those attempting to resume illegal trading at the closed Oginigba slaughterhouse had one week to vacate the place or risk being arrested and prosecuted.

He said the government would take over vacant plots or uncompleted buildings in the Old and New Government Reservation Areas (GRAs) and other parts of Port Harcourt City and Obio/Akpor councils occupied by criminals.

Wike said the government would recover and restore landfilled or reclaimed wetlands and demolish structures erected on natural water channels from the Eastern bypass to Abana and Eleme streets in the Old GRA.

He said the proposed action was part of measures to check perennial flooding in parts of Port Harcourt and Obio/Akpor councils, adding that only those with government permits and papers would be compensated.

The governor announced ban on cart pushers’ activities, noting that they had become notorious for scavenging of manhole covers.

He ordered law enforcement agencies to arrest and prosecute anyone violating the ban.

Wike banned disposal of refuse on the streets or open spaces in the Old and New GRAs of Port Harcourt and Obio/Akpor councils; pasting of posters, fliers, pictures, artworks, placards or inscriptions on or under flyovers, bridges, concrete walls and safety barricades on the roads.

He said the government would establish environmental marshals to enforce compliance with the sanitation laws.

The governor directed the chairmen of Port Harcourt, Ikwerre, Obio/Akpor and Oyigbo councils to within three weeks, from January 1, impound and remove trailers and articulated vehicles parked on the streets beyond 48 hours.

He sympathised with the victims of the recent fire incidents, especially those who lost their loved ones and property.

Wike said the government would strengthen the state Fire Service and urged the public take responsibility, to prevent fire outbreaks.