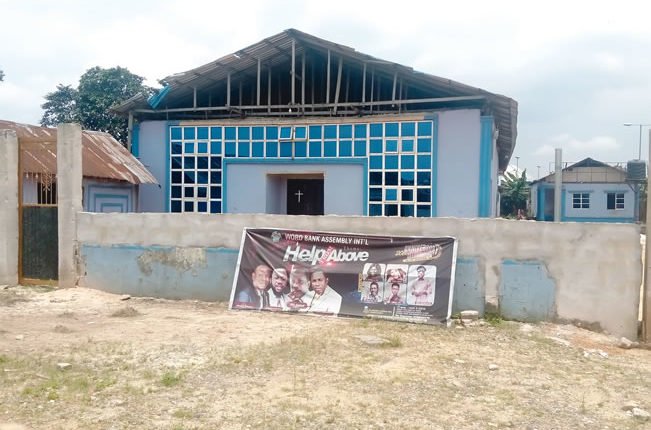 A marital journey of 12 years that already produced two kids – a boy and a girl – recently came to an end in Rivers State but the manner in which the marriage ended is what is still puzzling members of the public.

IT was business as usual at the headquarters of the Word Bank Assembly Church Int’l at 300 Elimgbu-Eneka Obio/Akpor Local Government Area of Rivers State, on Friday.

Multiple Source on Saturday revealed quietness with a few staff around going about their normal businesses.

There was no sign of the raging scandal involving the General Overseer of the church, Pastor Moses Adeeyo, over his marrying the wife of a member of his church, Mrs Tina Bright.

NAIJA LIVE TV was told that Pastor Adeeyo had travelled. Although staff members of the church said they did not know where he went to or when he would be back, a source told Saturday Tribune that the cleric might be on honeymoon since he just wedded his newfound love, Tina

Our correspondent was advised by one of the male staffers to call the pastor’s number which was posted on the church’s billboard.

Another worker, a woman who was just arriving at the church premises as our correspondent was leaving, also encouraged him to call Pastor Adeeyo’s line.

Several calls made to the pastor’s line went unanswered as did a text message sent to him on the matter.

‘Pastor said Holy Spirit told him my wife is his wife’

A middle-aged man, Ben Bright, is a member of the World Bank Assembly. In a Facebook post on Monday, August 9, 2021, he alleged that the General Overseer of the church, Pastor Adeeyo, married his wife, Tina, whom he introduced to the church.

He said he had returned from work about seven months ago only to realise that his wife and kids were gone. He said he searched for them to no avail.

“I searched everywhere and called everyone, even the G.O., unknown to me that he was the architect of my problem,” Ben said in the post.

He said his search yielded no result until “I saw these pictures online yesterday.” The images showed that his wife had got married to Pastor Adeeyo who Ben alleged stopped picking his calls and blocked his phone line during the search for Tina.

“I have been married to Mrs Tina Bright for over 12 years with two kids, a girl and a boy. I married her traditionally and had a white wedding and introduced her to my pastor, Moses Adeeyo. We started attending the church and became full financial members,” Ben wrote, while alleging that trouble started early in the year when Tina got an appointment as an assistant choir mistress.

Ben further wrote that Pastor Adeeyo “claimed that the Holy Spirit told him that she is his wife.”

‘I have no more business with my ‘ex-husband’’

But his estranged wife, Tina, in a viral video, claimed that she was a survivor of eleven years of torture and maltreatment in her marriage to Bright. She also claimed that the marriage had been dissolved by her family when they sought their inputs on the issues that characterised the union.

Contrary to Ben’s claim, Tina said she left the house for her mother’s house on November 28, 2020 after she couldn’t bear the treatment she got from Ben. She added that she later went to Lagos, stayed at a friend’s place and got a small job.

She said: “Feeding is a problem in the house. Ask Bright if he ever gave me any money for upkeep, even if it is just N5,000. No. But, I never complained. I know it is normal, he may not have money. And I was even the one going about to borrow money for our children’s school fees. Part of the money I borrowed is still there, it is Pastor Moses that is now helping me to repay part of the debt.”

She alleged that Ben made her attend her former church, stopped her from working during the COVID-19 pandemic and prevented her from keeping friends and associates because he feared she was promiscuous. “I took the oath against my faith just to prove that I am innocent and I have a record it. He woke me up one morning and said there was no marriage between us; that I was only wasting my time with him. He chased me out of our room, saying I was smelly. He said he would make my life miserable,” she said.

Fighting back tears in the emotion-laden video, Tina added that she returned to her family in Port-Harcourt in April to make the dissolution official.

“He kept calling but I told him it was over. I intimated my family and the king of my village of my predicament. They invited his father. His father refused to follow him because they all knew the story. Bright only came with his friend,” she said.

She noted that when the family wanted to separate them and repay what he paid as dowry, it was discovered that there was no record in the family ledger that he paid her bride price.

“I returned to Lagos after the meeting. He called me but I blocked him because I have nothing else to do with him. I came back two weeks ago and he saw me when he came to check the children in my father’s house. But he lied that he hasn’t seen me for seven months.

“There are many women out there who are dying like this but refused to leave because of what people might say. If I had died in Bright’s house, the same people would say ‘why didn’t you talk, why didn’t you leave?’ And now that I chose to leave, I have committed the worst crime! My children are there now going through serious emotional torture because of his attitude and character, but I don’t want to involve them in this,” Tina added.

However, Ben in a video on Wednesday, said he wouldn’t have been allowed to marry Tina if no bride price was paid, adding that he took the matter to social media because his wife got married to the pastor whom he normally approached to resolve disputes with his wife.

He said he was concerned that there was no dissolution of his marriage and neither was any repayment done to him.

Pastor’s son’s side of story

Meanwhile, there are reports that the pastor was still legally married to his first wife before his new marriage took place. Buttressing this, a 31-year-old son of the pastor, Peter Adeeyo, in a live Facebook video, claimed that his father was yet to finalise the dissolution of his marriage to his mother.

Peter, a father-of-three, noted that his father initiated divorce processes, adding that the proceedings which started in January 2020 were still being deliberated in court because it was delayed by the COVID-19 pandemic. He said he was intimated about his father’s new marriage by those who saw the wedding photographs.

“My father has not remarried. In law, if you want to remarry, you have to dissolve the first marriage. I was shocked when I saw the wedding pictures online. It was after I finished ministration in church. Three people called to ask me after seeing pictures on Facebook.

“I went there and I saw my father marry a strange woman. I don’t have a close relationship with her. I don’t even think I have spoken to her before. My parents presently have a marital crisis like many families do and my father decided to go to court. He served us the papers saying he was tired of the marriage. The court proceeding started in January 2020 before COVID-19 came.”

“While the court proceedings were ongoing, he packed out my mother’s belongings and rented a place at Harmony Estate for her about three months ago. It was someone else who gave her the keys to the rented apartment. The lawyer advised her not to live there and then she left for Abuja to stay with my sister before we heard that he got married to someone else.”

Peter, in the video, insisted that if his father wanted to remarry, “he needs to dissolve the first marriage legally and properly” because he was the one who approached the court for divorce after about 30 years. He noted that his mother could not speak on the matter yet because she did not have internet access.

He added: “I don’t have a stepmother yet; any woman with my father is on her own.”