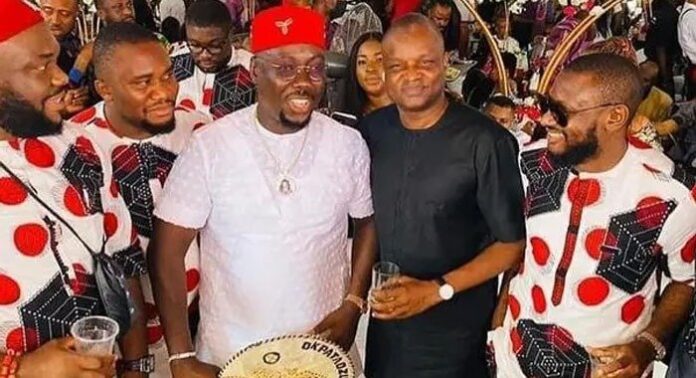 Following reports of the Central Bank of Nigeria (CBN) failing to sanction violators of the country’s currency at the burial ceremony of late mother of Nightclub businessman, Obi Cubana, the apex bank disclosed that it has no power to take such action.

NAIJA LIVE TV gathered that the abuse of the naira notes grabbed headlines in July after Obi Cubana, and his friends were captured violating the currency during his mother’s burial in Oba, Anambra State.

Recall that Section 21 of CBN Act of 2007 frowns
against the spraying of naira and stomping on it.

The law also states that any person caught violating the currency will be imprisoned for six months, with an option of fine – or both penalties will be meted on such individual.

However, the Acting Director of CBN’s Corporate Communications, Osita Nwanisobi, contradicted the CBN rule, stating that the financial regulator is not a law enforcement agency.

Nwanisobi, who spoke at an interactive session with the organised labour in Calabar, Cross River state over the weekend, where he represented CBN Governor, Godwin Emefiele, said, “CBN is not a law enforcement agency. But we completely frown at such an attitude where the national currency is not accorded its due respect as other nationals do their currencies.”

He said so much capital goes into the production of the naira, and this cost is passed on to Nigeria eventually.

This statement contradicts the CBN Act of 2007, which empowers the CBN to take action against abusers of naira.

According to CBN act: “(1) A person who tampers with a coin or note issued by the Bank is guilty of an offence and shall face imprisonment for a term not less than six months or to a fine not less than N50,000 or to both such fine and imprisonment.”