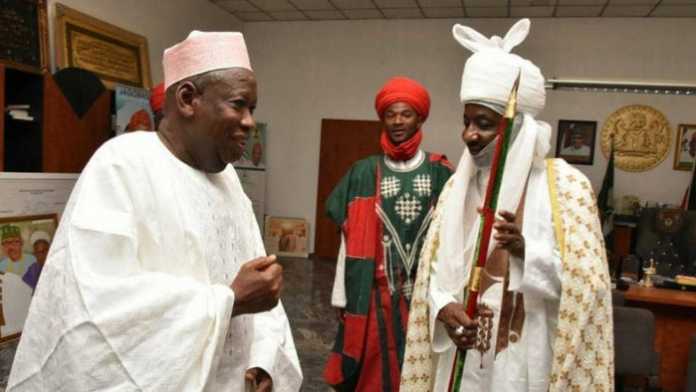 FOLLOWING growing pressure for him to resolve the long-running dispute between Governor Umar Ganduje of Kano State and the Emir of Kano, Muhammadu Sanusi, President Muhammadu Buhari, on Friday, declared that he will not intervene.

He made the declaration at the presidential villa, while receiving the governor and the newly elected legislators on the platform of the All Progressives Congress (APC), from Kano State.

Buhari premised his decision on the existence of the separation of powers between the Federal Government and the states even though he also pointed out notwithstanding, he has enough grounds in the constitution to ensure that the security of Nigerians is not compromised.

The president said: “I know my role as the president of Nigeria. By the constitution of the Federal Republic of Nigeria, the governor of Kano State has his own roles. Once a matter is in the hands of the House of Assembly (like in Kano), the president has no constitutional right to interfere.

“I am here by the constitution, I swore by it, and I am going to stand by it.

“But let me tell you the bottom line of my understanding of the constitutional role is that peace and security of all Nigerians must be guaranteed, where the people are threatened, then I will use my constitutional powers.”

While feeding questions from State House correspondents after the meeting, Ganduje affirmed that the rift between his government and the Emir Sanusi was a constitutional issue and must therefore be resolved constitutionally.

He acknowledged that a high-powered committee has been set up to bring the rift to an end and hoped that solution could soon be found.

Ganduje, whose over 50-man delegation included only one of the five first class emirs in the state, had been asked why the Kano emir was absent.

He responded that he could not carry all the five emirs with him at the same time.

He said: “We have five first class Emirates in Kano State and the Emir of Bichi is from one of the emirates. I cannot come with the whole five emirates at the same time.

“Yes, there is the Northern Elders Committee on the misunderstanding between the Emir of Kano and Kano State government. We met with that committee and dialoguing is still on. That is all I can say.

“It is a constitutional issue and the governor and the Emir, we are working within our own jurisdictions and the problem will be solved amicably and constitutionally.”

Buhari advised the Kano delegation that elected officials must live up to the promises they made to their constituents to justify the confidence reposed in them.

A statement issued by Garba Shehu, Senior Special Assistant to the President (Media & Publicity), after the meeting, quoted the president as saying: “I hope you are mindful of your promises to your constituencies. You went round and you promised your constituencies. I hope the promises you made are within the resources of your State.

“If you made promises outside your resources, it will be your problem because you are going to stand again in four years’ time. This is very important and it is important for our party.”

Governor Ganduje thanked the President for Federal Government projects in the State including: the Kano – Abuja road reconstruction; the modern railway from Kaduna to Kano, and from Kano to Niger Republic; the gas pipeline from Ajaokuta to Kaduna and from Kaduna to Kano; dualisation of Kano – Katsina highway; as well as the construction and equipping of new terminal wing of the Mallam Aminu Kano International Airport.

He also apprised the President of efforts of his government to make life better for Kano citizens especially in terms of security and education, saying: “We have done a lot in the area of security, even installing CCTV cameras in black spots and all major routes into Kano state. We also have a multi-purpose vehicle for monitoring, which has helped in arresting kidnappers and Boko Haram terrorists. We have also established an army training area.”

Coronavirus: Some Legislators Are Refusing Screening At Airport –...