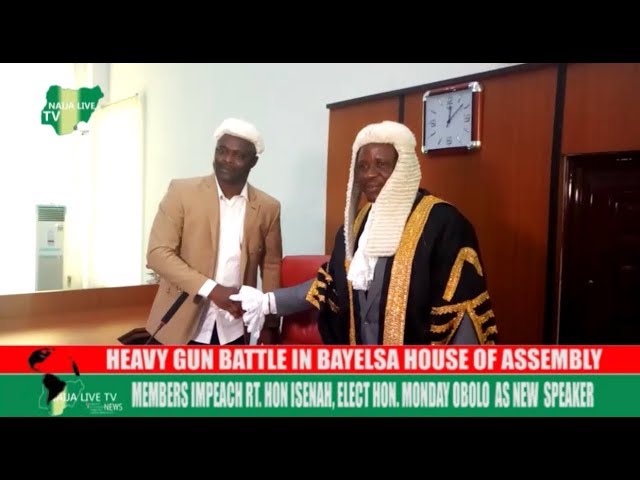 There was heavy gun battle yesterday among security details of contending factions of the Bayelsa State House of Assembly over attempts to remove the Rt. Hon. Tonye Isenah as Speaker.

Rt. Hon. Isenah, who battled to stop his impeachment, adjourned the sitting of the House sine die and left with five other members of the State Assembly amidst confusion.

The gun battle, which lasted over 15 minutes, started following the alarm that the Mace of the House have been taken away by Rt. Hon. Tonye Isenah.

The shooting caused panic and pandemonium among workers, and journalists who had been ordered out of the Assembly chambers in other not to witness the sitting.

NAIJA LIVE TV observed that the impeached Speaker, Rt.Hon. Tonye Isenah left the complex in company of the Four APC members in the House and Hon. Inekior Bonny-Ayah (Southern Ijaw 1) of the PDP.

The remaining 18 members of the House led by the Deputy Speaker, Hon. Abraham Ngobere (Brass 3) however brought out another MACE suspected to belong to the Yenagoa Local Government Council, and moved for the impeachment of the Speaker, Hon. Tonye Isenah.

Hon. Bernard Kenebai (Sagbama 2), who moved for the impeachment of the Rt. Hon. Tonye Isenah, was supported by a unanimous voice votes from members.

Immediately after, Hon. Oboku Oforji (Yenagoa 1) moved for the nomination of Hon. Monday Obolo to be nominated as Speaker of the State House of Assembly. The nomination was seconded by Hon. Naomi Igoli of Ogbia constituency 3.

Rt. Hon. Tonye Isenah, while reacting to the development, told newsmen on telephone, that “I did not go to the House as an impeached Speaker or the one that resigned. I adjourned Sine Die. Anything done without my reconvening the house is illegal. The House is an institution and a different arm of government that should be respected.”

“That House has been adjourned and any member who participated in that illegality called impeachment. Even the Sargent-At-Arms escorted me out and no one can reconvene the house.”

Also speaking after his emergence, the newly elected Speaker, Hon. Monday Obolo denied the alleged disappearance of the mace of the House’” the House of Assembly is a one united family. It is an honor to have elected to lead the Sixth Assembly. We are meant to debate and 18 members elected me. Bayelsa should expect the dividend of democracy.”

The impeached speaker, Tonye Emmanuel Isenah, representing Kolokuma/Opokuma Constituency 1, was elected in June,2019 and emerged the speaker in the first inaugural sitting of the sixth Assembly through a unanimous decision, after being nominated by Hon. Ebiowor Koku Obiyai representing Yenagoa Constituency 2 and Seconded by Hon. Mitema Obordor of Ogbia Constituency 2.

Anxiety in Ekiti over rumoured failing health condition of...