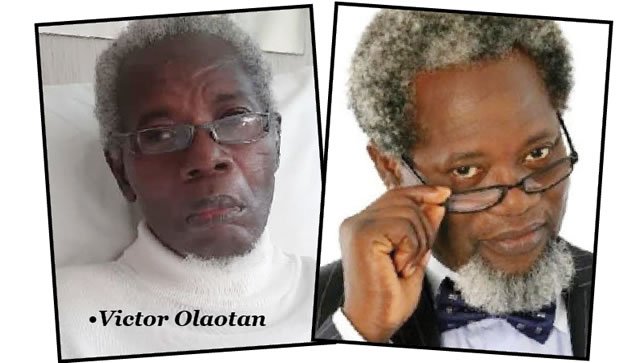 His wife, Julia Olatan, confirmed the death to NAIJA LIVE TV on Friday.

In an exclusive interview with NAIJA LIVE TV Olatan, who had been relentlessly seeking support for the actor, said her husband died on Thursday night in Lagos State.

Julia appreciated NAIJA LIVE TV and donors for helping her husband while battling for his life in a Turkish hospital.

“Victor Olaotan has passed on, I don’t take the help rendered us for granted. Sadly, Olaotan had to come back to Nigeria because we could no more raise the money to continue treatment, so the hospital sent him back. I’m grateful for my husband’s life and I know all is well.

“Despite the challenges, God has been good to me and my family. He was there for five years,” she said tearfully.

The deceased had suffered a traumatic brain injury after a ghastly car accident in October 2016.

The veteran actor had celebrated his 69th birthday on Wednesday, February 17, 2021, in a Turkish hospital battling with the effects of a traumatic brain injury he suffered after the ghastly car accident in October 2016.

Julia and some other ace actors had been soliciting support on Olaotan’s behalf.

In 2019, billionaire businessman and philanthropist, Femi Otedola, donated N30m to the actor.

Julia, who often spoke with her husband via video calls, had said whenever they spoke, she could see that he was “fighting for his life”.