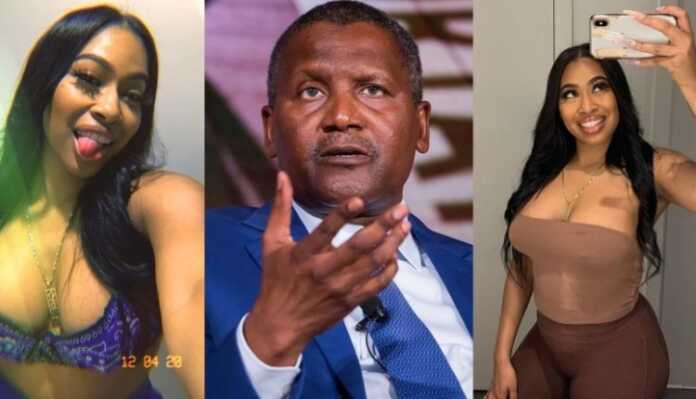 The Miami-Dade County Court in Florida, United States of America, has given a 20-day ultimatum to Autumn Spikes, the embattled ex-mistress of Africa’s richest man, Aliko Dangote, to respond to a lawsuit he filed against her.

According to the court summons served on Spikes, failure to respond to the suit before the expiration of the ultimatum could lead to her losing the case, money, wages, and property.

Dangote had filed the suit on January 22, demanding the sum of $5 million from Spikes, alleging that she had defamed his character and blackmailed him by sharing a viral video clip showing her seated beside him while lying down on the same couch, with part of his buttocks exposed.

A copy of the court’s ‘civil action summons’ which was served on the African-American lady on Thursday, said she had ‘20 calendar days’ from the day she was served to file her response, warning her of the consequences of failing to respond to the suit filed by the billionaire businessman.

The summons reads in part:

“A lawsuit has been filed against you. You have 20 calendar days after this summons is served on you to file a written response to the attached Complaint with the clerk of this Court.

“A phone call will not protect you. Your written response, including the case number given above and the names of the parties must be filed if you want the court to hear your side of the case.

“If you do not file your response on time, you may lose the case, and your wages, money, and property may thereafter be taken without further warning from the court. There are other legal requirements.

“If you do not know an attorney, you may call an attorney referral service or a legal aid office listed in the phone book.”

The messy fight between Dangote and his secret mistress of over 10 years became public knowledge when, on January 1, Spikes released the video on her Instagram page with the handle, @allorounda1, after he reportedly ended the affair.

The video must have irked Dangote who said she had breached the Non-Disclosure Agreement (NDA), he had with her prior to calling off the affair. He went further to sue her for libel and defamation of character.

Spikes again took to her Instagram page to say that the billionaire had ‘insulted’ her by offering her a ‘paltry’ sum of $15,000 for her to keep quiet over their affair.

She added that Dangote had “pressured and influenced” her to sign the NDA and offered to pay her $2,500 every month as palimony to keep her from exposing details of their affair.

“Davido didn’t pay my bride price, he won’t get...