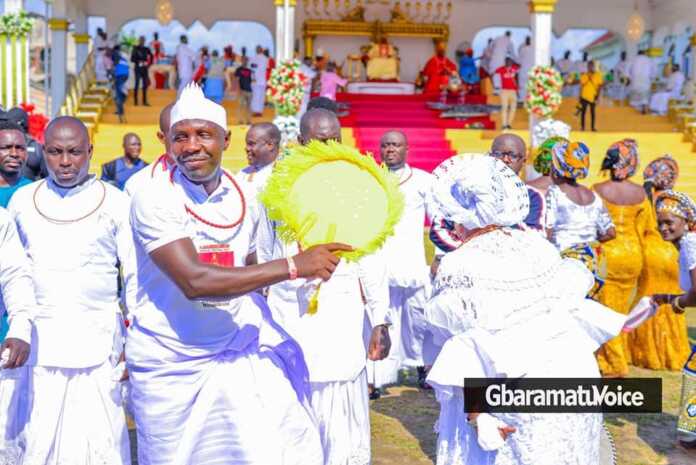 THOUSANDS of Ijaw people from all over Delta, Bayelsa, Edo and Ondo states converged on Oporoza town, the ancestral headquarters of Gbaramotu Kingdom in the Warri South Local Government Area on Friday to celebrate the climax of a week-long ‘spiritual cleansing’ of the Niger Delta communities.

The celebration aptly tagged ‘Gbaraun-Egbesu, Ibolomibo-Ere and Amaseikumor Annual festival’ was presided over by the chief priests from the various Niger Delta communities led by High Chief Government Ekpemukpolo, also known as Tompolo, the spiritual custodian of the Egbesu shrine in Oporoza, Gbaramatu Kingdom.

Tompolo is the renowned Ijaw freedom fighter and former General Officer Commanding, the Movement for the Emancipation of the Niger Delta.

The chief host and traditional ruler of Gbaramatu Kingdom, His Royal Majesty, Oboro Gbaraun II, Aketekpe, Agadagba, explained that “the Amaseikumor festival of Gbaramatu Kingdom is a series of spiritual cleansing activities meant to purify the kingdom and the entire Ijaw nation of evil, detrimental to the development of her people.

“This is a festival celebrated to entrench the nature of peaceful coexistence and foster unity among members of the Kingdom, Ijaw nation and her neighbours within the Nigerian polity. This explains the huge attendance of the festival annually by people from cross various tribes,” he said.

The Ijaw monarch used the forum to task the various state governors in the Niger Delta to checkmate the reckless influx of bandits into the region which he said had become worrisome.

“Your Excellencies (governors) should engage sincerely, high level information and intelligence gathering mechanisms to stop this menacing insecurity which is adversely affecting our national economy already.

“To ensure peace, unity and security, everybody however must be involved. I therefore call on all of us to do our bit in this regard,” he remarked.