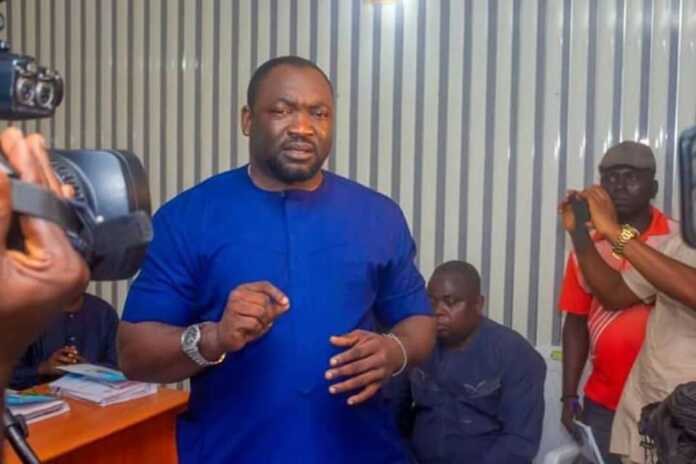 The Caretaker and Extraordinary Committee Secretary of the All Progressive Congress (APC) in Bayelsa State, Hon. Alabo Martins has dismissed as “sponsored” and “deliberate lie” the claims made by the faction of the party in the state that all is not well due to the rising cases of defection and disunity in the party, saying those behind the campaign of calumny against the APC in the state are sponsored contractors under the PDP led administration.

Some party members identified as action of the APC led by Hon. Ebierien Fala Itubor and the political group known as Otita Transformation Movement popularly known as Otita Force Worldwide had in a separate letters to Gov. Mai Mala Buni led National Caretaker Committee and President Muhammadu Buhari on Tuesday had claimed that the gale of defection of party members to the People’s Democratic Party (PDP) can only be halted and genuine reconciliation made if it ignore claims made by the loyalists of the Minister of State for Petroleum Resources, Chief Timipre Sylva on the activities of the Party in the state.

But the Hon. Alabo Martins, who is the Caretaker and Extraordinary Committee Secretary of the All Progressive Congress (APC) in Bayelsa State, in a statement issued on Thursday and made available to leadership in Yenagoa via electronic mail, said despite the frivolous campaign to create a wrong image of the party leadership to the general public, the APC in Bayelsa State remain one big peaceful and united family under the unassailable leadership of the Minister of State for Petroleum Resources and Former Governor of the State, Timipre Sylva.

Hon. Alabo Martins stated that the allege sponsored persons who claimed to be APC members have been suspended for the past two years due to numerous anti-party activities with members of the opposition party (PDP), “the primary aim of their self-proclaimed membership of APC is to create disunity among party members, and to create a wrong image of the party leadership to the general public. Their suspension also came as a result of attending the Bayelsa West Zoning Arrangement Meeting which was organized by members of the People Democratic Party (PDP)”

“The self-acclaimed factional chairman and his cohorts have been working for the opposition party (PDP) all along and have even received contracts from the opposition party, particularly from SUBEB, maintaining that they did not register or revalidate their membership with the party in the just concluded party membership registration and revalidation exercise. And as such they are not recognized as APC members”.

Martins stated it categorically that the self -acclaimed factional chairman has not attended any APC national meeting or functions in the party national secretariat because, himself and his cohorts have been suspended from the party over the years, due to numerous anti-party activities with the opposition party.

He added that the party under the leadership of Sylva has been liberal and carried every critical stakeholder of the party in the state in the scheme of things and urged those ranting in the media to retrace their step and join in building the party,”. Those leaving the party in recent times has not been faithful and committed members of the party, but joined the party because of what he describe as stomach infrastructure, desperation, greed and treachery. They only rode on the popularity of the party and efficacy of the leadership to achieve their selfish interest”.

CRACKS IN BAYELSA APC: “All is not well and no pretence about it” – State Factional Chairman raised Alarm

APC announces registration of 180,500 old and new members in Bayelsa