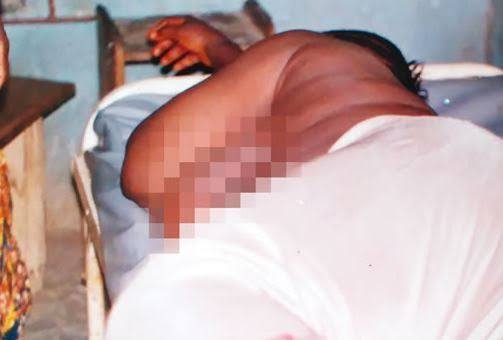 A 42-year old tenant, Damilare Adeoya, has expressed his satisfaction after he caught his landlord having sex with his wife in his matrimonial bed and he immediately used a cutlass to kill him.

NAIJA LIVE TV reports that the incident happened in Osun State where Adeoya resides with his wife.

The alleged murder was reported to the Police and he was arrested by the Osun State Police Command and is now facing murder charge which attracts life imprisonment if he is tried and found guilty before the Court.

He was said to have also attacked his wife, who sustained life threatening injuries and was rushed to the hospital in order to save her life.

This was confirmed by the Osun State Public Relations Officer, Idrissu Adeboyejo, who said that the suspect was in Police custody undergoing interrogations over the act.

He said the matter has been transferred to the State CID and the suspect will be charged to Court as soon as investigations are concluded.
He said that the suspect caught his wife with the landlord on his matrimonial bed when he got back just after two hours of leaving for work and he has confessed to the crime.

The suspect, who confessed to the crime, said “ I have been suspecting my wife and the landlord for about a month now, so i decided to come back home earlier when i saw a text message my wife had sent to a number saying by 11am”.

“I got in through the kitchen door and went straight to my bedroom where i caught them naked. This is a person my wife do complain about that she so much dislikes not knowing she was saying otherwise.”

“I’m ready to face the law, I really don’t care about what happens at this time.” Adeoya concluded.

Panic in Osun as residents see lifeless body on river

BREAKING: Panic in Osun as 6 Persons who tested positive escape from Isolation Centre

Crime Watch SAINT MIENPAMO - May 26, 2020 - 3:45 pm
0
stray bullets from operatives of the Nigerian Army hit Madubuezi, who sat in a commercial tricycle on his way to school...

FCT Minister’s meets with religious leaders over closure of...

Journalist arrested for ‘defaming’ A’Ibom commissioner yet to regain...

Bayelsa govt sends 25 samples everyday for COVID-19 testing at the...