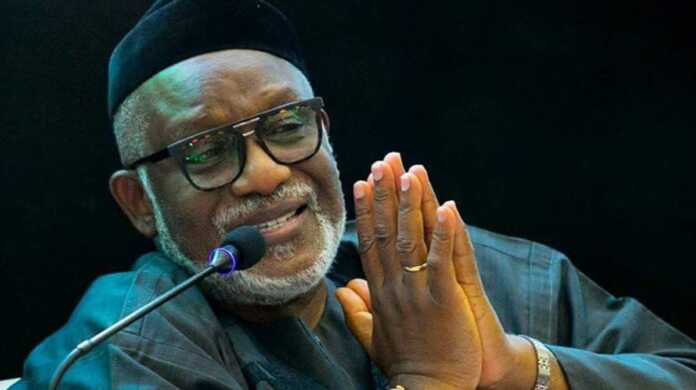 Governor Oluwarotimi Akeredolu of Ondo State has described the death of the popular televangelist, Prophet Temitope Joshua as a great loss not only to Africa but the world at large.

Akeredolu, who expressed shock over the sudden demise of T.B Joshua, stated that the renowned man of God was a blessing to humanity as well as a great ambassador of the State whose Ministry he said was noted for charity.

The governor, in a statement issued by his Chief Press Secretary, Richard Olatunde, said the exit of the philanthropist will be sorely missed by many, adding that “the pains are not mere emotional flashes; they are indeed piercing.”

The Ondo-born pastor, who died on Saturday night shortly after a church programme, was the leader and founder of The Synagogue, Church of All Nations, a Christian megachurch that runs the Emmanuel TV station in Lagos State.

While saying that late Pastor T.B Joshua was committed to giving, Akeredolu emphasized that he demonstrated timelessly, an alluring service to humanity and compassion by assisting not only his home local government, Akoko North West but other adjoining local governments in Akoko land benefitted from his large heart of benevolence.

According to the governor, who hails from the same senatorial district with the late evangelist, he was inexorably imbued with calmness while lifting the downtrodden, stressing that as a man of God,he did not just win souls for Christ but was passionate about changing lives.

“Of significant note too, Pastor Joshua never hesitated to assist in whatever manner the Ondo State Government desired such.To us in Ondo State, we consider this a personal loss. He was a pride to the Sunshine State

“Not only Africa is hit hard; this is a great global knock as his Pastor TB Joshua’s ministry attracted an immeasurable foreign followership. Christendom has lost a giant,” he said.

“The reality of the finality of death, truly hurts the heart. But for TB Joshua, he had played his own part of the endless life orchestra; he had departed. We must take solace in his good deeds he did while here. He is now Heaven’s gain. The people have lost a committed giver. We shall continue to remember his contributions to the development of our State.”