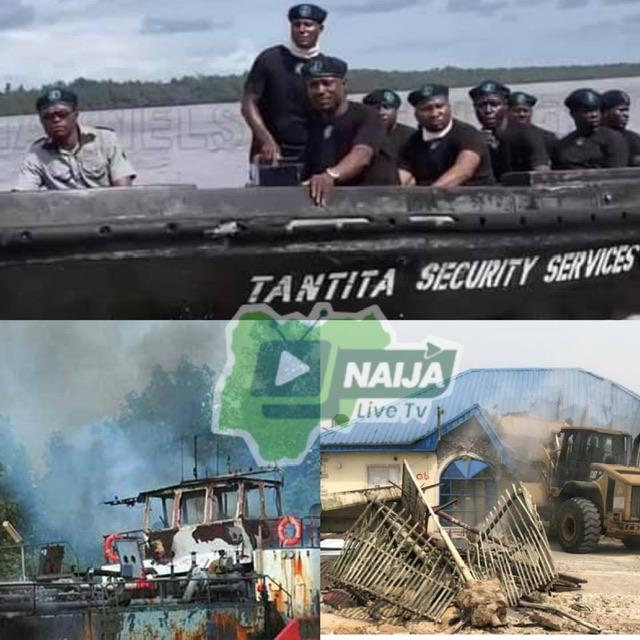 A petrol Filling station in Opete, Udu local government area, Delta state and a barge has been destroyed over their alleged link with illegal bunkering activities.

In the Asugbo area along the Excravos water where the barge was arrested by Tantita security services Nigeria limited was set ablaze, two suspects also arrested were handed over to security operatives for further action.

According to a top security source, ” a delegation from NNPC ltd led by the General Manager Nigerian Petroleum Development Company, Mr Aliyu Zarah arrived from Abuja with media houses from Abuja for covering of the handling of some arrested platforms and facilities used for illegal bunkering activities.

“The delegation was received by the Commanding officer 3 Battalion, Rear, Major I.H. Liman and executives of Tantita security services Nigeria limited. They proceeded to Opete community in Udu local government area, Delta state to inspect a filling station discovered to be used for illegal bunkering.

On arrival, the team was briefed by the Technical Director of Tantita , Mr Warredi Enisuoh on the details of the discovery. A bulldozer was mobilized to commence demolition of the filling station while troops provided security cover for the exercise.

“Same day the delegation from NNPC, Tantita , media and the security proceeded to Asugbo general area along Excravos river to inspect a non-propelled barge arrested independently by Tantita security services limited. It was revealed that two suspects were arrested with the barge. The arrested barge was appropriately handled with security coverage provided by troops and the Joint Task Force South-south, Operation Delta Safe .”