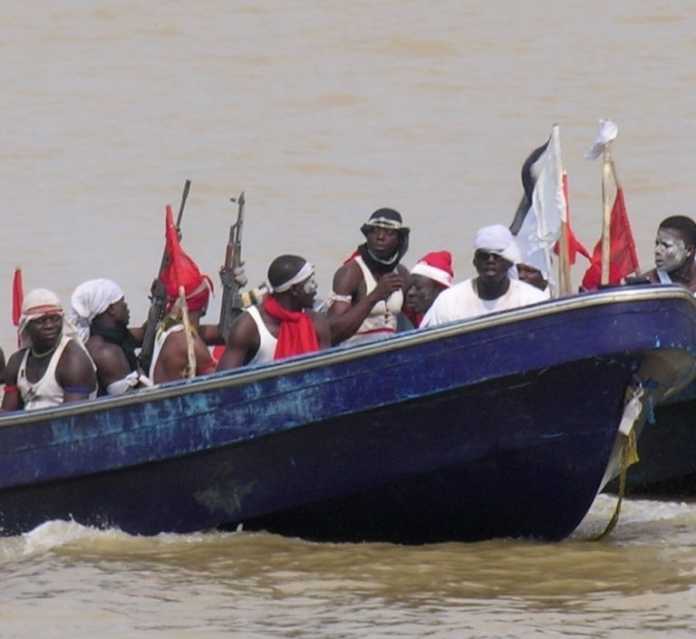 ….as Police extend dusk to Dawn curfew by 7 days

The rising protest against the Thursday nullification of the All Progressive Congress (APC) candidate, Chief David Lyon victory in Bayelsa yesterday took a new dimension with a coalition of Militant groups under the aegis of the Reformed Niger Delta Avengers (RNDA) threatening to resume attacks on oil installations in the region if the mandate is not restored.

The RNDA, in the letter issued yesterday and signed by leaders of the Nine Militant group from the Nine States of the Niger Delta, though they have accepted ceasefire and have been engaging in peace advocacy in the region, the recent judgment of the Supreme Court nullifying the election of David Lyon is unacceptable, provocative and targeted at alleged perversion of the Civil Rights of the people.

The leader of the Coalition of RNDA, Comrade Johnmark Ezon Ebi also known as Obama,noted that the decision to abort ceasefire and declare hostilities in the region was based on the outcome of investigations which showed that the ruling of the Supreme Court was allegedly procured through the black market by the Peoples Democratic Party (PDP).

The RNDA warned that failure for the presidency and the Chief Justice of the federation, Justice Tanko Ibrahim to reverse the anti-people ruling will result in unimaginable outcome,” the RNDA should not be held responsible for whatever damage that will lead to bombing of oil pipelines to cripple the economy of the country”.

The RNDA stated that by the amended electoral ac,which stated that if the winner of the governorship election has been nullified by any means, the electoral body should conduct a fresh election and not to swear in the 2nd runner of the said election because the voters did not vote for the second runner and therefore the second runner could not be imposed on state off which David Lyon won with a wide spread Maxim of total vote cast across the entire 8 Local government Areas of Bayelsa state.”

“David Lyon was declared winner of the governorship election which was well accepted by all sons and daughters of Bayelsa state and rejected the candidate of peoples demonizing party in the person of Douye Diri. David Lyon remains the choice of the people. REFORMED NIGER DELTA AVENGERS (RNDA ) will not fold its arms and watch democracy rubbished in Nigeria with the rascality of black market judgement from the judiciary to undermine the peoples mandate as it is in Bayelsa”

“ Douye Diri CANNOT be Governor and can never be because somebody who was not duely elected for cannot be imposed to the people of Bayelsans through one bribed bought and paid over black market judgement. Bayelsa people are very much aware bribe money in foreign currency were used to procure this anti Bayelsa people verdict. We will soon come after those involved in the alleged illegal transaction. Those involved in the black market judgment to undermine the people’s choice Governor who was duely elected last November by the good people of Bayelsa state will all pay with their lives, their families and their properties in the Niger Delta region and in the federal capital”.

“And to this end if nothing is done to reverse this orchestrated I’ll fated illegal evil inhuman black market judgement to remove the unpopular governor that is illegally occupying David Lyon seat in the creek haven government house, the RNDA will be left with no other option to declare war in the creek and to continue from where we stopped”

“As such the RNDA should not be hold responsible for whatever havoc and colossal damage that will occur in the creek to cripple the economy of the country, and will show example soon.
We mean business”.

Meanwhile, the Bayelsa State Police Command has extended the dusk-to-dawn curfew imposed in the state as a result of the violent protest that erupted the state due to the last Thursday’s Supreme Court Judgement which ousted Chief David Lyon of APC as the governor-elect for the state.

The state Commissioner of Police, Mr Uche Anozia, while briefing newsmen at the command’s headquarters in Yenagoa on Monday, said that the credible intelligence available to the command indicate that the prevailing security situation in the state demands the extension.

He said the curfew will now be relaxed on Sunday, February 23, 2020 with effect from 10pm to 6pm every day.

The state police command had earlier imposed curfew in the state from Friday, February 14, 2020 to Sunday February 16, 2020 to forestall the escalation of violence that erupted in the state last weekend.

Anozia said: “In light of the credible intelligence available to the command vis-a-vis the prevailing security situation in Bayelsa state, the command has deemed it necessary to review and extend the curfew to Sunday 23rd February, 2020 with effect from Monday 17th February, 2020, from 10pm to 6am.