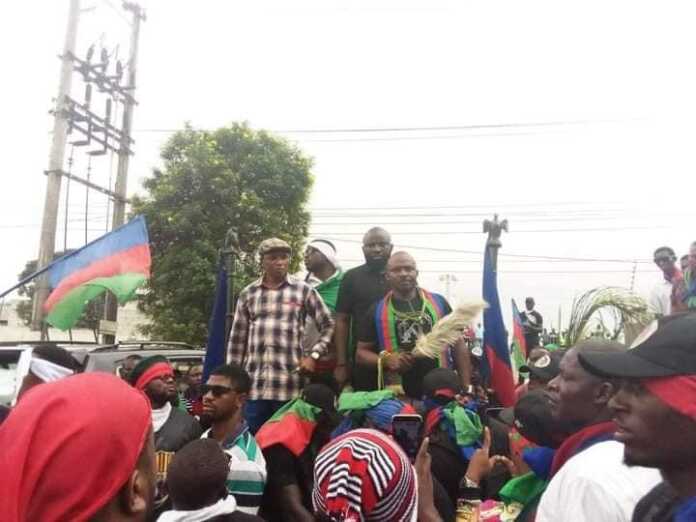 A group, the Movement for the Survival of Izon Ethnic Nationality in the Niger Delta, MOSIEND, has declared its support for the foremost ex-militant leader in the region, High Chief Government Ekpemukpolo over the Seven days ultimatum to President Muhammadu Buhari for the immediate constitution of a substantive board for the Niger Delta Development Commission (NDDC).

MOSIEND, in a statement issued to newsmen by its national spokesman, Comrade Charles Omusuku, explained that the group is already mobilizing its membership across the region in readiness if the President fail to constitute the substantive board.

“Also the recent happenings in the Ministry of Niger Delta Affairs and the Niger Delta Development Commission, NDDC, show that Akpabio is incompetent and does not have the interest of the people of the region at heart”.

Omusuku said both Akpabio and the Sole Administrator of the NDDC, Barr. Akwa Effiong Okon, have abandoned the ideals and visions that led to the creation of the NDDC, the defunct OMPADEC and the Ministry of Niger Delta Affairs because they were not part of the genuine Niger Delta struggle which was informed by great selflessness and personal sacrifice.

He said, “We accept wholeheartedly President Muhammadu Buhari’s forensic audit, but Akpabio, Akwa and their cronies have compromised the forensic audit. We dare ask, let them tell the world how many destilting projects existed during and before Prof. Nelson Brambaifa’s days, and how many in totality are the destilting jobs till date during Akwa’s days.”

According to him, Akpabio and Akwa have, at different fora, tried to demystify the real heroes of the Niger Delta struggle, and have deliberately removed them from the Commission that was brought for all.

The MOSIEND spokesman said that same thing is being done to genuine Niger Delta contractors whom, he noted, obtained loans with big collateral to complete NDDC projects but are being forced into penury by Akpabio and Akwa who have refused to pay them.

He said Akpabio should not be given the privilege to appoint members of the new substantive board of the NDDC as such will be detrimental to the peace and well-being of the people of the Niger Delta.

Comrade Charles Omusuku also asked Akpabio, Barr. Akwa and the forensic auditors to explain to the world why they are secretly visiting NDDC project sites without the contractors handling the projects or their agents on site, saying that there is urgent need for the Presidency, the EFCC and all men of food conscience to wade into the matter to find out the true situation of things and save the Niger Delta.

He insisted that, in the best interest of the nation, there should fairness, equity and stakeholders inclusiveness in the distribution of contracts, employment and health support schemes in the NDDC henceforth.

Omusuku said that a situation whereby about 60% of NDDC contracts are awarded to Akwa Ibomites is unacceptable as it is totally against the NDDC Act, 2000; maintaining that Akpabio and Akwa have secretly employed over 360 people in the NDDC and that about 70% of the said employees are from Akwa Ibom State – thereby increasing the bloated and overburdened administrative cost of the NDDC.

He warned that the people of the Niger Delta should not be taken for granted or considered as fools, saying that MOSIEND is following up the current happenings keenly and will not succumb to become slaves who sold their birthrights, heritage and due national largesse to Akpabio and Akwa for mere sweet talks.

While wondering why money would be borrowed from the NDDC to finance ITU-Calabar Road when genuine contractors are yet to be paid – with youths and women in resource areas and creeks dying of hunger and unemployment, Comrade Charles Omusuku called on President Muhammadu Buhari to carefully examine those to be appointed to take over the substantive board of the NDDC and the Niger Delta Ministry; saying that only men of conscience, humanity and a record of regional self sacrifice should be appointed.