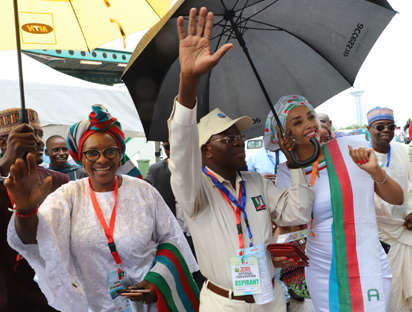 The Peoples Democratic Party (PDP) has challenged the National Chairman of the All Progressives Congress (APC), Adams Oshiomhole, to immediately submit himself to the Economic and Financial Crimes Commission (EFCC) over humongous corruption allegations hanging on his neck.

The party said Oshiomhole lacks the rectitude to speak in public as a leader at any level, whatsoever, until he clears the allegations that he diverted billions of naira meant for the people of Edo state while he was governor.

PDP noted that since the petition against him at the EFCC is in the public domain, the newly coronated national chairman would do the APC, Buhari Presidency, the EFCC as well as himself a lot of good by quietly submitting himself for investigation and possibly, prosecution.

According to the party, since one of the campaign footstool upon which APC was elected into office is fighting corruption, it will be incongruous for Oshiomhole to go about his new assignment with allegation of corruption, even as tiny as a strand of hair.

It is also instructive for the new chairman to understand that Nigerians are no longer inclined to sophistry, illogical arguments, deceits, contrivance and recourse to abuse as a method of campaign.

As such, the PDP would be prepared for engagements that have the potency of rescuing our people from the hunger and starvation which the APC has sunk them.

However, the essence of Oshiomhole’s emergence as President Muhammadu Buhari’s sole candidate was not lost on Nigerians as the Presidency imposed him as a pliable instrument to frustrate other would-be presidential aspirants of APC extraction and hand the ticket to President Buhari, who, obviously is afraid to stand a presidential primary due to his failures in office.

With Saturday’s charade, APC and its Federal Government, which claims to have zero tolerance for corruption, have eaten their vomits, confirming that they have been hypocritical and trending on lies, deception and propaganda.

With the outcome of the Saturday’s convention, the APC has kissed internal democracy goodbye in the selection of its candidates at all levels as the national leadership, led by people burdened with corruption allegations, cannot but submit to the whim and caprices of those who granted them official protection from prosecution.

President Buhari and his handlers should however note that manipulating the APC convention and seizing the party’s Presidential ticket cannot help them as Nigerians, are now fully rallying on the platform of the repositioned PDP in their quest for a new President, who truly has the competence to effectively run a united, secure and prosperous nation, come 2019.