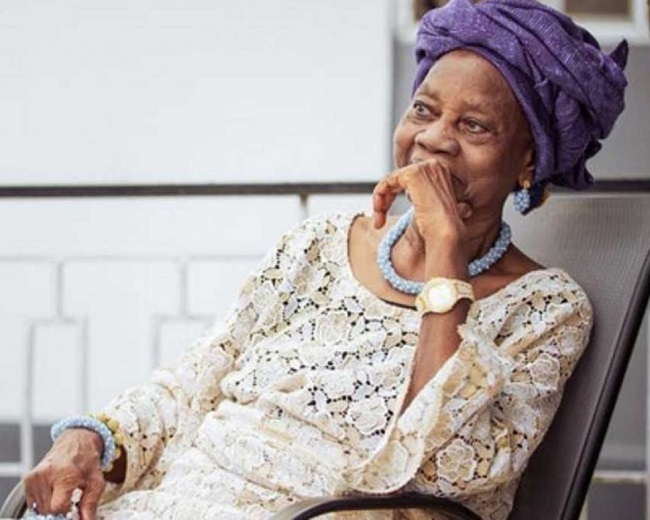 Doja is the mother of Femi Otedola, the Nigerian billionaire.

Buhari, in a congratulatory letter he signed, praised her “selfless service and charitable works” while she was the first lady in Lagos, wishing her good health and many more years of celebration.

“I note your selfless service and charitable works to the people of Lagos State when you served as First Lady between 1992 and 1993 and years after this period,” the president wrote.

“In celebrating this milestone, I also recognise the many contributions you have made to the people of Epe, most recently the building and dedication of St. Peter’s Catholic Church. I wish you many more years in good health. Happy birthday.”

In a letter he signed personally, the vice president opened with, “Dolapo and I are honoured to wish our dear mother a happy 90th birthday.”

Osinbajo wrote that the celebrant is living a “remarkable life of service to others through philanthropy”, adding that such qualities have also been passed down to her offspring.

“Now fulfil your long-expressed heart’s desire and vow to build a benefiting edifice, the St. Peter’s Catholic Church auditorium in Odoragunshin, Epe, for the worship of our Lord and continued propagation of the gospel,” he wrote.

“God has been faithful indeed, and we bless His holy name that you not only accomplished this but are alive and well to witness its official dedication. Your remarkable life of service to others through philanthropy has most certainly been imbibed by your children and grandchildren, whose reputation for promoting charitable causes is also well known.”

On his part, Obasanjo described the celebrant as a “source of blessing and tremendous inspiration to many generations of Nigerians who came in contact with you, especially the womenfolk.”

“You are an exemplary patriot, and the record of your steady, constant and beneficial influence as a dependable and worthy role model to the entire womenfolk and younger generations has been astonishingly remarkable. We, therefore, join you in thanking God for such a life spent in touching so many other lives positively.”

Others who have penned warm, celebratory messages to the nonagenarian include Femi Gbajabiamila, speaker of the house of representatives; Babajide Sanwo-Olu, governor of Lagos; Aliko Dangote, the billionaire businessman; Dapo Abiodun, governor of Ogun, among others.