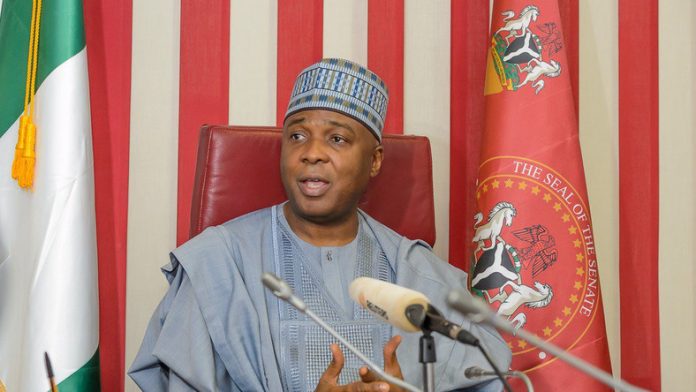 The 8th Senate, which was inaugurated on June 9, 2015 adjourned its legislative activities indefinitely today after four years.

Although the life of the 8th senate stands officially dissolved, midnight of June 8, to pave way for inauguration of the 9th Senate on June 11, with the indefinite adjournment, it will no longer hold legislative activities.

Saraki in his farewell speech thanked his colleagues for demonstrating patriotism towards protecting the sanctity of the legislature.

He added that although some of them had to pay dearly for daring to defend the Constitution of the Federal Republic of Nigeria, it was worth it.

Today, we held the final Senate plenary. It is a victory in itself that we are seeing the journey to its momentous end. It is a testament to what people can do when they come together for the greater good. This is also one of those occasions when the Supreme Creator reminds us, once again, that power does not reside in any one person’.

The pieces of legislation we passed in the crucial areas and arenas affecting the daily lives of citizens – on the economy, in education, security, anti-corruption, health and so on – will remain a benchmark. Working together, we clocked many firsts in the 8th Senate, and we should rightly be proud of these, especially as they are imperishable legacies.

JUST IN: Court declines to sack Saraki, Dogara, Akpabio, 51others over defection

AFDB Crisis: We’ve not asked Adesina to step down...

BREAKING: US President Trump threatens to shut down social...