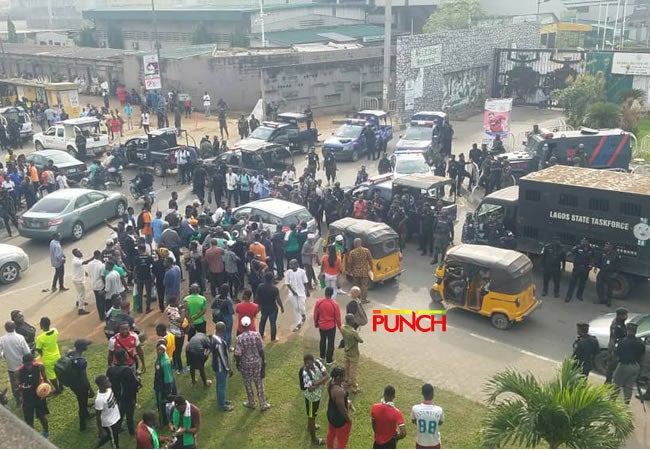 A foundation, Idera De Movement, on Sunday donated the sum of N50, 000 to Mrs Sariyu Akanmu, a fufu seller allegedly manhandled by the police during last Monday’s protest organised by the RevolutionNow group in Osogbo, the Osun State capital.

Akanmu, a resident of Agboyele Compound, Osogbo was hawking fufu on the street of Osogbo, Osun State capital when she ran into members of RevolutionNow protesting at Fagbewesa junction. She joined them.

After almost two hours of protest, security operatives, forcefully dispersed the protesters and arrested seven members of the group.

Sariyu was beaten and a policeman hit her at her waist with the butt of his gun, before journalists at the scene rescued her.

According to the foundation, the money donated to the 70-year old Sariyu should be used to seek proper medical attention.

A director in the Idera De Movement, Mr Funsho Babarinde, who handed the money to Sariyu on behalf of Dr Akin Ogunbiyi, the owner of the foundation, said the septuagenarian displayed uncommon courage by her action on the day of the protest.

Babarinde said, “When we first read the report on Tuesday in The Punch, many of us did not truly appreciate the heroics displayed by this woman. But Saturday Punch followed the story up with another interview with the woman. The truth is that many Nigerians don’t have her courage. As a foundation, the least we could do is to appreciate her. Our principal, Dr Akin Ogunbiyi, could have personally presented this but because he was not around, he directed we should give her a sum of N50,000. We are giving the money for her to be able to seek proper medical care.

“In the interview she granted to Saturday Punch, the woman said she heard the protesters singing about the suffering of the masses and because she was also suffering, she dropped her tray and joined the protest. We also appreciate The Punch bringing out one of the heroes amongst us. That is why you will continue to be the best in your business.”

He urged security operatives in the country to adopt more civil way of handling protest, saying using force against a 70-year old harmless protester was unwarranted.

Responding, Mrs Akanmu, who spoke in Yoruba, expressed appreciation to Idera De Foundation and The Punch for the financial support.

“I am ready to breastfeed you till the world...