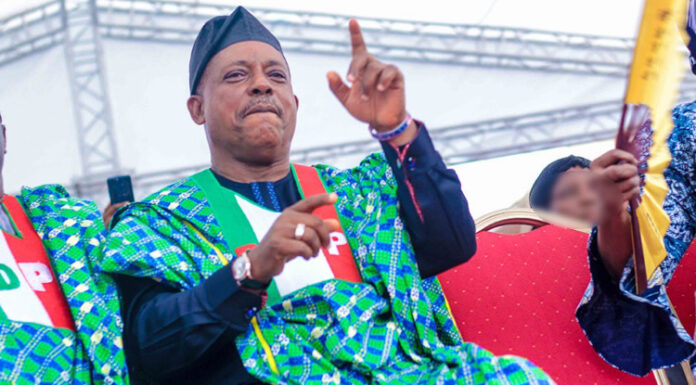 A Peoples Democratic Party (PDP) member of the House of Representatives, Hon. Rimamnde Kwewum Shawulu has called on the national chairman of the party, Prince Uche Secondus and his colleagues in the National Working Committee (NWC) to resign from office.

The lawmaker in a letter dated 6th July, 2021 and addressed to the national chairman noted with disappointment the rate at which the party which was to provide purposeful opposition and alternative was losing members to the ruling All Progressives Congress (APC) in droves.

Recall that the leading opposition party, the PDP, has in the last few months lost three state Governors and tens of members across the states including members of the National Assembly to the APC.

The two-time lawmaker from Taraba state in his open letter cited instances of defections by PDP governors and lawmakers, with specific mention of the recent defections from Zamfara state.

Titled: ‘In the Interest of our Party, Democracy and the People of Nigeria: Time To Do The Needful’, Hon. Shawulu said: “Today, not unexpectedly, four members of the House of Representatives from Zamfara State denounced the Peoples Democratic Party (PDP) and defected to the ruling All Progressive Congress (APC).

“Unlike other times, when leaders of the party in the House (both the Minority Caucus Leadership and the House PDP Caucus Leadership), put up some form of protest, not a whisper was heard or a hand raised in protest against the decamping!”

While expressing how sad he felt in writing the letter, Hon. Shawulu noted with nostalgia the past contributions and the promising posture of the national chairman when he campaigned and sought for support of party faithful to occupy the highest position of the party.

“…No one can doubt that you have made your contributions to the growth of the party. Sir not much use will be served in going down memory lane on the formation of the PDP, your contributions to the party and the sacrifices you and other leaders have made. Indeed, when the Governor of Rivers State HE Nyesome Wike sought the support of members of the House of Representatives for your candidacy of the National Chairmanship of the Party, he extolled your virtues of tenacity and commitment to the party and our hope, then, to win the 2019 elections.

“He said you were the most experienced and loyal person who would commit everything to the success of the party. Indeed, and according to him, the relentless pursuit of success would be the guide of your actions”, he said.

He noted that the goings on in the party left much to be desired as the chairman had left it in a place worst than where it was before the exit of its former chairman, Adamu Mua’zu.

“Dear Chairman, Sir, events in the last two years call for sober reflection and sacrifices by both the leadership and membership of the party and it is necessary you set the ball rolling, so that the party will come back to life and be seen as a viable alternative to the ruinous APC.

“Then, will its doors be seen to be open to the millions that want to come into the party to mobilize Nigerians to take back the country from the iniquitous forces that have seized it by the jugular?

“This was the obvious wish of opinion of party members and leaders when Dr Adamu Muazu resigned as Chairman of the party. Your good self took over to enable the party regain momentum. Presently, without discounting the efforts and sacrifices you have made, it is obvious that our party is in far worse circumstances than when Alhaji Adamu Muazu fled the scene.”

Shawulu also reminded Secondus of the many failings of the PDP under his watch, which he said lend credence to some rumours that high ranking party members had allegedly been settled to make it unelectable in the future.

“One is wont to dismiss as idle prattle rumours making the rounds that some at the highest levels of our party have been ‘settled’ or compromised such as to make the PDP unelectable. But in politics perception no matter how wrong-headed often drives reality and even rather outlandish conspiracy theories will gain more traction with more defections of governors or of members of the National Assembly to the APC, which given the havoc it has inflicted on the country ought to be the party on the run,” he said.

In proferring a way out of the political doldrums the party is in, Shawulu said:
“Parents sacrifice for their children. Leaders sacrifice for the good of the people they lead. History is replete with examples of leaders who have had to leave their positions so that the people they lead will survive or prosper. In several of our cultures in Nigeria, leaders who lead their people into disastrous circumstances commit suicide!”

“Sir, history calls and beckons on you to do the needful, not to die but to live for the party by surrendering leadership, in order for reconciliation and repositioning of the party to begin in earnest for a fresh start.

You, and indeed, all members of the National Working Committee should make such a sacrifice in the interest of the PDP, Nigeria and democracy.

I plead with you sir to show leadership today and in the interest of the party, your good name, and the future of Nigeria to resign immediately as National Chairman.”