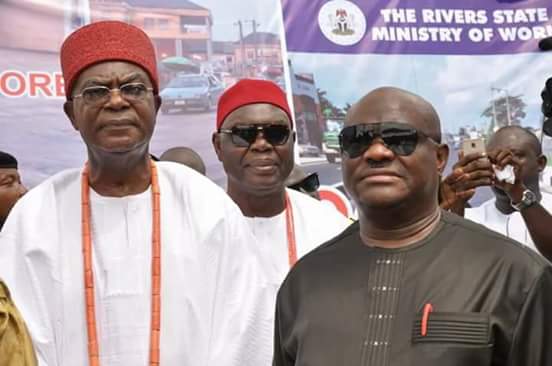 ▪Rivers State is lucky to have Governor Wike—Obi of Onitsha

Rivers State Governor, Nyesom Ezenwo Wike has declared that the Economic and Financial Crimes Commission (EFCC) on behalf of the embattled APC Federal Government has started inviting contractors executing projects in the state to inquire if the projects are real.

This is as the Obi of Onitsha, Igwe Nnaemeka Achebe declared that Rivers State is lucky to have Governor Wike who is transforming the state through the execution of pro-people projects.

Speaking during the commissioning of Abacha Road in GRA Phase 3, Port Harcourt on Friday, Governor Wike regretted that the EFCC and the failed APC Federal Government are working desperately to distract the Rivers State Government.

He said: “EFCC are now inviting our contractors to inquire if the projects we are executing are fake or real.

“Instead of encouraging us to continue with our good works, they are working desperately to distract us. EFCC should go to non performing states.

“I want to tell our contractors that we are not afraid because we are doing the right thing for the people of Rivers State “.

He said that Rivers State is witnessing real development, hence it is confident to invite prominent Nigerians with pedigree to inspect and commission key projects.

The governor urged the people to protect projects in the area, saying that the State Government will not tolerate street trading on newly constructed roads.

Governor Wike said that the reconstructed Abacha Road has created the right environment for businesses to thrive. He commended the businesses along the route for supporting the contractor by supplying their workers food.

He urged the people to continue to pay their taxes for the administration to deliver more projects for the people.

Commissioning the project, the Obi of Onitsha, Igwe Nnaemeka Achebe stated that he is happy that the state where he grew up is being transformed through prudent management of resources.

He said: “This is home-coming for me. I am a stakeholder in this city. I have businesses here. I grew up in Abonnema as a young child.

“Rivers State is very lucky to have Governor Wike. In three years, the Rivers State Governor has achieved a great deal of projects .”

He described Governor Wike as a man who makes a promise and works assiduously to keep his promise. He said that Governor Wike is a man of passion and commitment.

The Traditional Ruler prayed God to keep the Rivers State Governor so that he can leave distinct legacies for the people.

“Port Harcourt is so new. Port Harcourt has been renewed. This particular area was so swampy . I was offered a plot of land here for one million naira and I rejected it. Today, everything has changed around here”, Igwe Nnaemeka Achebe said.

He said that the road is key as it links areas where key business transactions take place in Port Harcourt .

Speaking on behalf of Rumueme Kingdom, Dr Franklin Nlerum announced the endorsement of Governor Wike for his numerous achievements.

Rivers State Works Commissioner, Mr Dum Dekor said the road has been dualised with very deep drainage to address the issue of flooding in the area.