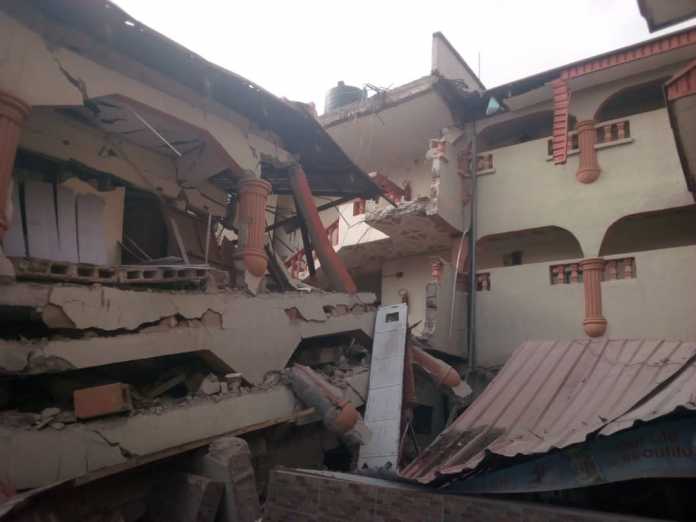 The Ebonyi state Police Command on Thursday said it has invited Mr. Christian Akanihu, owner of Metro View Hotel that collapsed Wednesday in Abakaliki for interrogation.

The spokesperson of the command, DSP Loveth Odah, made this known while speaking with the media on Phone.

According to her: “I want to tell you that the Divisional Police Officer in charge of Kpirikpiri area reported to the command that a wing of a two story building housing a hotel near Presco campus of Ebonyi State University; collapsed last night.

“After talking with the DPO of the area of that incident, he confirmed the arrest of the owner of the hotel. He was invited to give his own side of the story of the incident.

“Like as I told you, the matter is being investigated and if at the end of the day, we found out that the materials used in building the house is substandard by experts, we will go ahead and enforce the law on him but for now, it is not arrest per se but an invitation for us to hear from him, so that it will enable us unravel the course of the collapse of the building,” she stated

Although it was gathered that the invitation of Akanihu was facilitated by the Senior Special Assistant, SSA to the governor on Infrastructural Maintenance, Chief Ali Odefa.

When contacted, Odefa said the state government will conduct integrity test on all public buildings in Abakaliki to ascertain their standard so as to avert the repeat of the same incident in the state.