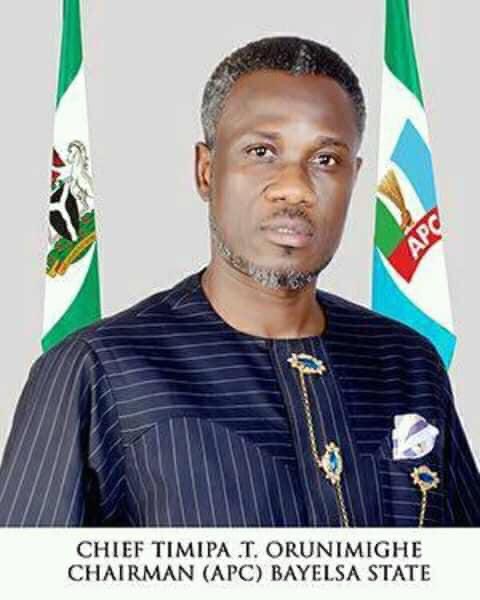 The pioneer Chairman of the All Progressives Congress (APC) in Bayelsa State, Chief Tiwei Orunimighe, has commended President Muhammadu Buhari, Minister of State for Petroleum Resources, Chief Timipre Sylva and members of the National Assembly for the passage of the Petroleum Industry Bill (PIB).

Oruminighe in a statement he signed in Yenagoa on Friday said the feat, which came after many failed attempts,  that spanned over 20 years, was worthy of celebration.

Describing Sylva as a tactician and silent achiever, the APC stalwart, said when  signed into law by President Muhammdu Buhari, the passed PIB would open a new chapter in the oil and gas industry in Nigeria.

He said that the passage of the PIB would raise investments in the sector, increase the revenue base of the country, and increase community participation, inclusion and development.

Oruminighe noted that Sylva had worked tirelessly to reverse the negative trends in the oil and gas sector, increased premiums in the gas sub -sector, opened up the African market to collaborative backward and forward integration in products development and sales  since his emergence as a minister.

He said Sylva also facilitated the take-off of the Train – 07 Liquefied Natural Gas (LNG) project in Bonny, Rivers State adding that the signing of the Investment Decision for the rehabilitation of the Port Harcourt refinery, the Brass LNG Project, the renewed push for Local Content development and management amongst others set Sylva apart from many others before him.

Orunimighe commended President Muhammdu Buhari for giving Sylva the necessary support and latitude to turn around the oil and gas sector and urged the President to sign the PIB into law and put his name in the hearts of the people of the Niger Delta region.

He further commended the 9th National Assembly, led Sen. Ahmed Lawan for the boldness and commitment to the passage of the PIB.