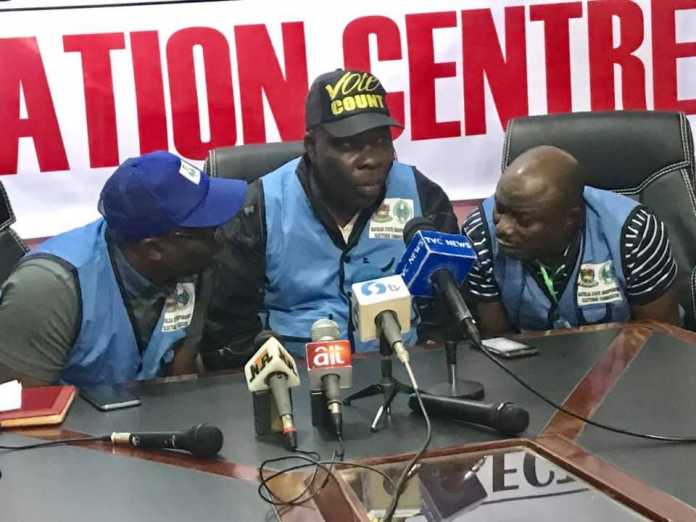 The Peoples Democratic Party (PDP) has won all eight chairmanship positions in the 2019 Local Government Council Elections held on Saturday.

NAIJA LIVE TV Reports that the Returning Officers from the eight council areas took turns to announce the results of the election at the Bayelsa State Independent Electoral Commission, BYSIEC collation center at the Yenagoa City Council late on Saturday night.

Diepreye Ubarugu of the PDP polled 42,539 votes to beat other contenders to emerge Chairman of Kolokuma-Opokuma LGA, while Dr. Bertola Perekeme scored 62,529 to clinch that of Ekeremor.

Alali Embelakpor was declared winner of Sagbama Chairmanship election with 96, 468 votes as Kia Nigeria topped other candidates with 107,150 votes to win in Southern Ijaw.

Brass went to Victor Isaiah who is making a return as Council Boss with 28,667 votes as Ebinyo Turnah won Ogbia with 17,661 votes.

Nembe was won by Alalibo West with 54,562 votes while the Mayor of Yenagoa City elect is Oropaye Nimizua who scored 89,831 votes.

The PDP also swept the polls in the 105 councillorship elections.

44 political parties took part in the 2019 Bayelsa State Local Council election with the main opposition party, the All Progressives Congress and some others boycotting the process.

SEE RESULTS AS ANNOUNCED BY BYSIEC

Drama as Davido, Chioma unfollow each other on Instagram