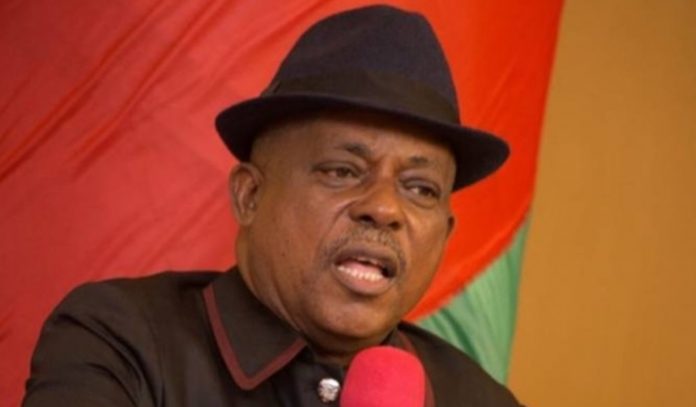 The Peoples Democratic Party has outlined how its 2019 presidential candidate will emerge.

In a 40-page document titled ‘Electoral Guideline for the PDP, Directorate of Organisation and Mobilisation’, exclusively obtained by SUNDAY PUNCH in Abuja on Saturday, the party said its presidential aspirants are to pay a total sum of N12m for both nomination and expression of interest forms, respectively.

However, female aspirants are to pay only N2m for expression of interest form as they are exempted from the payment of N10m nomination fee.

The document that explained these modalities was signed by the National Chairman of the PDP, Prince Uche Secondus and the National Secretary of the party, Senator Umaru Tsauri.

The party said all aspirants are to swear to an oath to abide by the decisions of the party on the conduct of its primary elections.

The document said each aspirant must be nominated by not less than “60 persons from at least two-thirds of all the states of the federation who shall be registered voters in their respective local government areas and also registered members of the party.”

The document added, “A copy of the voter’s registration card of the aspirant shall be attached to the duly completed nomination form.

“To be accompanied by a sworn declaration made before a Commissioner of Oaths or notary public; undertaking to abide by the guidelines, all laws and any rules or regulations made by the party for the conduct of the primary elections.

“The decision of the National Executive Committee of the party on all primary elections shall be final and binding.”

The party stated that its NEC would appoint a Presidential Screening Committee on the recommendation of the NWC.

The committee, it said “shall consist of a chairman and eight others. One from each geo-political zone, plus two women (one from the North and another from the South).”

It added that aggrieved aspirants, who fail the screening exercise, would be free to appeal to a panel that would be led by Secondus, which will also include all other members of the NWC.

The document added that all the aspirants must be “duly registered financial members of the party.”

It was however silent on the modalities to determine the financial status of the aspirants.

While it said the presidential candidate would emerge through “modified open secret system,” it also added that the “aspirant with the highest number of votes at the end of voting shall be declared the winner of the primary.”

The document was however silent on the date and venue of the special national convention where the candidate would emerge.

The party indicated that the “date and venue for the convention would be made known, at least seven days before the event (convention).”

Part of the qualifications listed for its presidential aspirants are that they must be citizens of Nigeria by birth and that they must not be below the age of 40.

The aspirants are also expected to be registered voters and must attach a copy of their voter card and registration cards to their duly completed form code PD003/P.

Among those who have declared their intention to run for Presidency on the platform of the PDP are a former Vice President, Atiku Abubakar; a former Governor of Kano State, Ibrahim Shekarau; Governor of Gombe State, Ibrahim Dankwambo; Governor of Ekiti State, Ayo Fayose; and a former Minister of Special Duties, Tanimu Turaki (SAN).

There are unconfirmed reports that a few members of the ruling All Progressives Congress may defect to the former ruling party to vie for its presidential ticket.

I may sue political parties over nomination fees –Falana

Human rights lawyer, Mr. Femi Falana (SAN), on Saturday, restated his opposition to the sale of nomination forms to aspirants for elective offices by political parties.

Falana, in an interview with SUNDAY PUNCH, threatened to take legal action against political parties that were still selling nomination forms to aspirants despite previous court judgments prohibiting such payment.

Falana, had last week, in Lagos, during the one-day national electoral summit, organised by the Transition Monitoring Group with support from the United Kingdom’s Department for International Development, railed against the commercialisation of nomination forms by political parties.

He regretted that despite President Muhammadu Buhari expressing disappointment that he took a loan of N27m to buy the APC nomination form during the 2015 elections, he had not been able to change the guideline.

Falana took on the political parties on Saturday while also indicating his intention to sue them if they continued in the act.

He said, “The conditions for contesting elections from local government, to the House of Assembly, governorship, House of Representatives, Senate and presidential levels, are all in the constitution.

“There are decisions of the court to the effect that the Independent National Electoral Commission and state electoral commissions cannot collect fees from candidates who are contesting elections.

“So, if I am going to contest election, you can’t ask me to pay N27m as nomination fee because that is unknown to the constitution.

“Therefore, the parties cannot decide their own rules. They cannot impose prohibitive rules that will restrict the participation in the contest of an election to moneybags.

“Of course, we may have to sue the political parties if they continue this illegality. We cannot go on like this.”

He added that aggrieved aspirants should be encouraged to sue their parties.

“Aggrieved party members should be encouraged to challenge the prohibitive nomination fees imposed on aspirants by political parties.

“I believe any citizen, who meets the requirements outlined in the Constitution, is qualified to contest any election. Political parties cannot add to the constitutional requirements.”