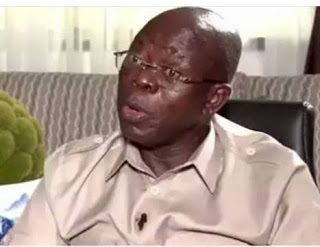 Following the Apex Court Ruling that overturned the the election of David Lyon of the All Progressives Congress in Bayelsa State Governorship last week, The Chairman of the Party; Adams Oshiomhole has called a press conference to address the party’s stand on the judgement.

“Oshiomhole has made the intention of the party know that they will overturn the judgement of the Apex Court by Calling for a review of the ruling. Say, the opposition PDP gave Mary Odili 100billion to overturn justice against our candidate in Bayelsa,” Oshiomhole lamented.

this development has brought more agitations in the party, where some of the party stewards are calling for the resignation of Oshiomhole saying it was his incompetence that cost the party that election in Bayelsa State.

while members of the opposition party; PDP reprimanded the Chairman for the statement he made after the Apex Court Judgement, that there won’t be any handing over in the state. They alleged that statement triggered the violent protests that were carried out by Supporters of David Lyon.

please drop your reactions and thought on the comment box. lets interact together.

Oshiomhole resumes as APC National Chairman …Says, “struggle for his seat a distraction”

Meet Nigerian Microbiologist Who is Very Determined To Find...

How To Report Churches And Social Gatherings That Violate...