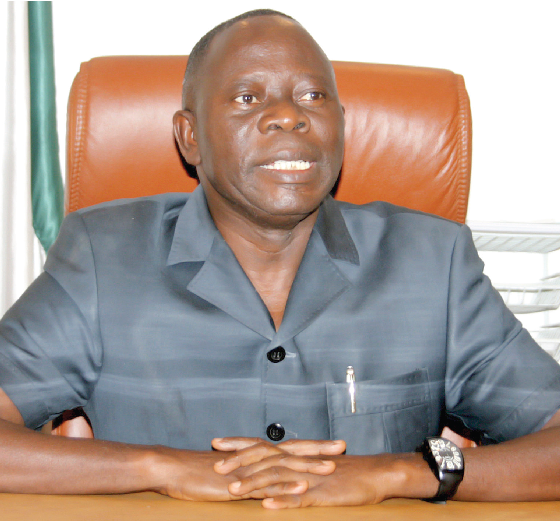 The National Chairman of the All Progressives Congress (APC), Adams Oshiomhole, has told Senate President Bukola Saraki, that the only way he can avoid impeachment is if he resigns.

Oshiomhole stated this during a meeting with Senators and members of the House of Representatives elected on the platform of the APC, in Abuja on Tuesday.

He claimed that Saraki, after his defection to the Peoples Democratic Party (PDP), is now a member of the minority in the Senate.

“Democracy teaches us that minority has the right to have their say but majority must have their way. So, if we have 56 senators and they have 49 senators, I insist that 49 senators cannot preside over the affairs of a House in which APC has 56 senators. And I ask them to tell us anywhere in the world where minority rules over majority.

“Often times, we take flights to Washington and other places to understudy the American presidential system of government. Once you lose majority, without further ado, you step down.

“Over and above all of these stories about illegal impeachment, let me restate that we cannot be subjected to minority rule in the Nigerian Senate and therefore, whether it is convenient for Distinguished Senator Saraki or not, the truth is whether by morality or by law or by convention, Saraki can only avoid impeachment by toeing the path of honour, step down so that APC can take over the leadership of the Senate.

“So, I want to repeat, Saraki as President of the Senate will be lawfully and democratically impeached. It will not be illegally done. It will be done according to law and tradition.

“Those lawyers who have chosen to sit as judges, need to be reminded that lawyers are at best, officers of the court and do not constitute the court. So, when Saraki is lawfully and democratically impeached, they will be free to go to anywhere they want to go and canvass the legality or the illegality of the action. It is not in their place to pronounce with finality as if they constitute the judicial arm of government,” Oshiomhole said.