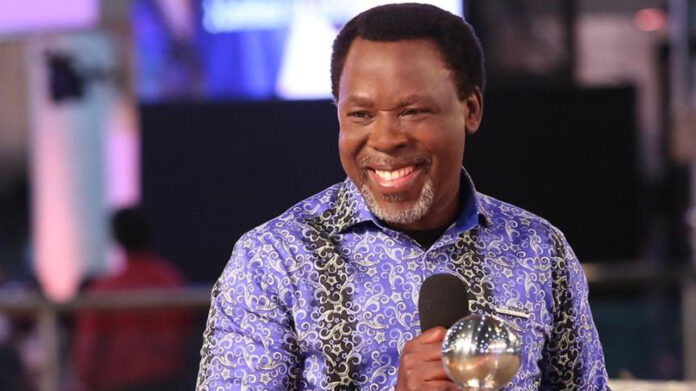 One week after Prophet Temitope Balogun Joshua’s demise, his church, the Synagogue Church of All Nations (SCOAN), has remained calm without its usual boisterous atmosphere.

There is still no activity in the Synagogue, while the busy church, which attracted more weekly attendees than the combined number of visitors to Buckingham Palace and the Tower of London, has remained silent., when reporters visited the Church in Lagos yesterday Sunday.

Except for the imposing edifice surrounding with flags of nations, which were lowered at half mast, the premise, which was hitherto a beehive of activities especially on Sundays, has become a shadow of its old self.

Unlike last Sunday, when the road leading to the church at Bolorunpelu along Ikotun road was barricaded, it was a free drive, as plans to name a successor linger while arrangement of his burial goes on.

There were, however, security checks by the police that were always stationed at the entrance even before the demise of the late cleric, better known as TB Joshua.

NAIJA LIVE TV gathered that his family members met in Lagos on Tuesday, June 8 to fine-tune the burial plans and decide where the Prophet, who is also known as ‘the man’ in Synagogue’ is to be buried.

Alhaji Salisu Musa, an uncle of the late man of God told reporters that the burial date was yet to be decided by the family.

While the family continues with the burial plans and where the late SCOAN founder is to be buried, the traditional ruler of his hometown, Arigidi Akoko in Akoko North Local Government Area of Ondo State, Oba Yisa Olanipekun, had appealed that he be buried in the town.

But traditional rulers from Akoko land, said they would foot the bill for a befitting burial to the late TB Joshua, hence insisted he must be buried in his hometown, Arigidi-Akoko.

“We can handle all his burial arrangements, not only Arigidi but all the Akokos, comprising four local governments. We don’t joke with him; we know what he has done for us.

“Prophet had it in mind that he was coming home, so why would his remains be buried in Lagos? That is what he wants. He is from here,” Oba Olanipekun said.

“Look at these late pastors, Moses Orimolade was brought to Ikare, Ayo Babalola was taken to Ikeji-Arakeji, Pastor Timothy Obadare was taken to Ilesa in Osun state, among others, so why will ours be different?

“Is he from Lagos? So, they should please, don’t get the whole Akoko angry with them because all the Obas in Akoko have been calling me in respect of that,” the monarch queried.

According to Oba Olanipekun, his greatest regret was that the late TB Joshua could not complete the project he was doing in Arigidi. The project, which is a mini town and situated on an expanse of land. is said to have a university, primary and secondary schools, a shopping mall, hospital and helipad.

There were also speculations that the late cleric had planned to move SCOAN headquarters and the prayer mountain to Arigidi, to boost economic activities in the town through tourism.