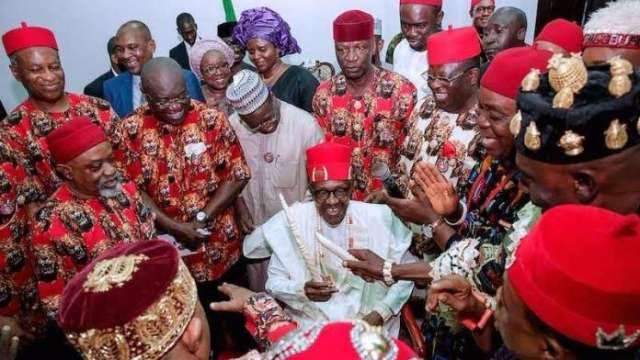 Ohanaeze Ndigbo, the apex socio-political body of the Igbos, has demanded the immediate release of Senator Enyinnaya Abaribe, who was reportedly arrested by operatives of the Department of State Security on Friday.

President General of Ohanaeze, Chief John Nwodo, who reacted to the development in a statement, said only the Nigerian army can disclose Nnamdi Kanu’s whereabouts.

The statement, which was made available to our correspondent in Enugu on Friday evening, said, ‎”The circumstances prevailing at the time of the disappearance of Nnamdi Kanu are beyond the contemplation of the law that a surety can guarantee the production of an accused person.

“The army in the name of “Operation Python Dance” invaded Nnamdi’s home and destabilised normalcy there.

“It is only the security agency that can disclose Nnamdi’s whereabouts.

“Senator Abaribe has no capacity or has any surety in the circumstances, to know the whereabouts of Nnamdi Kanu.

What happened in Umahia was an invasion, a war of a kind.

“Nnamdi may have been killed or captured in the imbroglio or even escaped into hiding.

“The onus lies on the security forces to disclose his whereabouts.

“The judiciary is beginning to tow the line of the executive by throwing the law overboard in matters that affect the South-East.

“We are all equal before the law – Senator Abaribe must be released forthwith.”