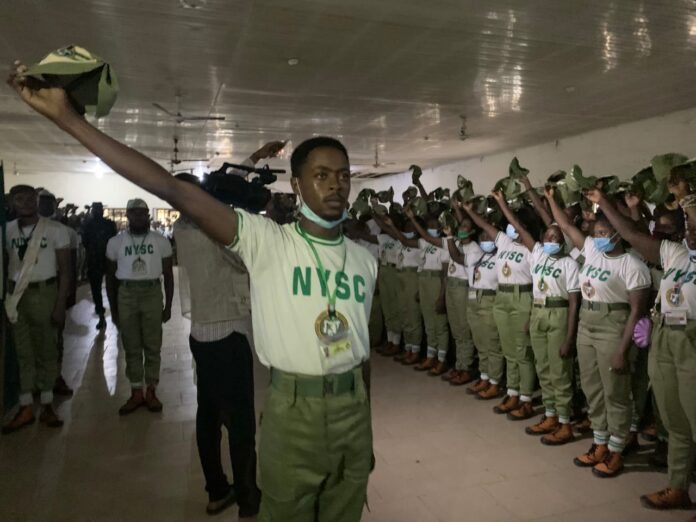 Director General, Brig Gen Shuiabu Ibrahim of the National Youth Service Corps ( NYSC) has commended Corps members over years of involvement in the uplifting of the living standards of host communities through community Development Services (CDS).

According to Brig Gen Shuiabu Ibrahim, these CDS projects have uplifted the lives of the people and urged the Corps members to sustain the spirit of patriotism, hard work and resilience among other virtues they have imbibed during their service year.

Director General, Brig Gen Shuiabu Ibrahim , who was represented by the Bayelsa State Coordinator, Mrs Ojugo Elizabeth Iyowuna during the closing ceremony to mark the end of 2021 Batch B,stream II orientation course in Bayelsa State, urged Corps members to accept their postings in good faith perform their duties with diligence and add value to the host communities by undertaking personal and group Community Development Service projects that will uplift living standard of the people.

He pointed out that “Nigeria is looking up to corps members in advancing national unity and development and emphasized that the NYSC Skill Acquisition and Entrepreneurship Development (SAED ) programme is aimed at equipping them for self – employment and wealth creation.

He therefore encouraged them to build on the skills they have acquired by availing themselves of opportunities for post – camp training.

The Director General, who reaffirmed the commitment of the management to corps members security and general welfare, cautioned them against risky engagements such as staying out late at nights, attendance of late night parties, visitation of dangerous places, unauthorized journeys, night journeys and acceptance of car rides from strangers.

” I also implore you to shun drug abuse and trafficking, cyber crime, advanced – fee fraud and other vices. Do also remember that engagement in local politics of your host communities is a no – go – area for you. In all circumstances, always be conscious of the implications of your actions or inaction for the image of your families, the NYSC and your institutions of graduation.”

” It is now mandatory for all corps members in transit to always cut short their trips from six O’ clock in the evening and pass the night at military barracks and other locations officially designated as safe. You are also advised to board vehicles at approved motor parks to avoid falling prey to criminals disguising as commercial vehicle drivers.” He stressed.

He commended the corps members for complying with Covid- 19 prevention protocols during the camp and encouraged them to present themselves for Covid – 19 vaccination as well as sensitize members of their host communities about preventive measures, including the need to accept the vaccines.

The Director General also commended the Corps members employers and appealed to them to accept the Service Corps members, provide enabling environment for them to develop their potentials and mentor them in building on the leadership skills imparted on them in the course of the orientation exercise.

He called on the State and Local Government authorities, traditional rulers and other stakeholders to give the necessary encouragement to corps members, especially through support for their Community Development Service initiatives.

He used the opportunity to commend the State Coordinator and other Camp officials for their dedication and team work, which led to the success of the orientation course. He charged them to sustain the zeal to work collectively to guide and mentor the patriotic youths on national assignment.

He expressed profound gratitude to the Federal Government for its unwavering support for the scheme and also appreciated the support of State Governments, Local Government Councils, Security Agencies, the Presidential Steering Committee on Covid – 19, the Nigeria Centre for Disease Control, the National Agency for the Control of AIDs, the TY Danjuma Foundation, traditional rulers, Corps Employers and other stakeholders for variously ensuring a hitch free 2021 Batch B, stream II orientation course nation wide.